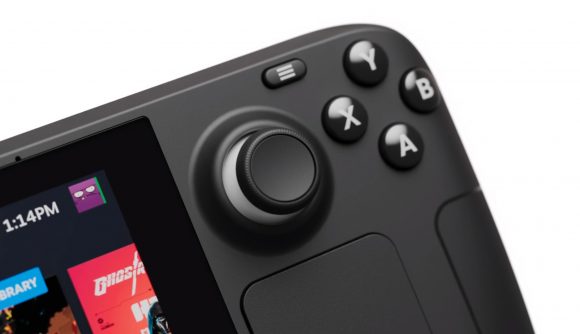 GPUs like the Nvidia RTX 3080 suffered from availability at launch with scalpers snapping them up left, right, and centre, but Valve doesn’t want its recently announced Steam Deck to go down the same route. It’s a tough nut to crack, but the reservation system put in place by the company means the new handheld gaming PC might not suffer from the same stock issues as the best graphics card.

Valve says it put the system in place to “ensure an orderly and fair ordering process for customers”. Scalpers won’t be able to just create brand-new Steam accounts to make reservations, as you’ll only be able to purchase a single Steam Deck through an already-existing account. It just needs to be in “good standing”, and have made a purchase through the platform prior to June 2021.

These rules only apply for the first 48 hours of reservations, however. Presumably after this point, any newly created Steam account will be able to make a reservation, and it’s not known how long this stage of reservations will run for.

You’ll also need to put down a $4 / £5 reservation, which will count towards your final purchase. It’s not clear whether this is refundable if you decide against purchasing in the future, however. If you place a reservation, you should get an invitation from Valve in December to pay the full amount, as Valve expects the device to ship in the same month – just in time for Christmas.

Gabe Newell told IGN that “our view is, if we’re doing this right, we’re going to be selling these in millions of units, and it’s clearly going to be establishing a product category that ourselves and other PC manufacturers are going to be able to participate in.” With such an ambitious scale in mind, you should be able to grab one later down the line, even if the Steam Deck succumbs to the same stock issues as other components to begin with.