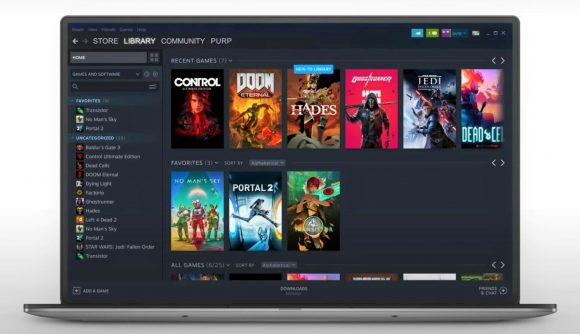 Steam might be the biggest PC gaming platform, but it ultimately lacks many of the comforts available to console gamers. However, a newly registered patent suggests that Valve is exploring the possibility of ‘instant play’, a mechanic that could let you play Steam games before they’ve finished downloading to your gaming PC.

Spotted by SteamDB creator Pavel Djundik, the patent outlines a Steam mechanic that could potentially “track system read operations”, effectively allowing users to play Steam games before the entirety of a game’s data has been downloaded. According to the patent’s abstract, the feature could also be used to reduce latency during gameplay by “prefetching” data.

The concept of playing games as they download isn’t exactly new, and similar tricks have been present on consoles since the launch of the PS4 and Xbox One. That said, if you’re familiar with the way the system works, you’ll know that games are usually only partially playable when launched mid-download. Valve’s potential spin on the technique could come with similar caveats, but the patent’s use of the phrase ‘without limitation’ could mean exactly what it says on the tin.

Valve’s new patent is undeniably appealing, but it’s not a done deal just yet. In fact, it’s more or less standard practice for companies to register concepts and ideas regardless of whether they’re on the cards or not.

New Valve patent for tracking game file read operations and to allow "instant play" where you can start a game before it finishes downloading.https://t.co/VYGj7p9siG

So, while it seems like Valve at least has a vision for ‘instant play’, we’ll have to wait and see whether the idea is actually put into motion. Who knows? Perhaps it’ll join AMD’s Linux driver optimisation to give the upcoming Steam Deck an edge once it enters the handheld space.