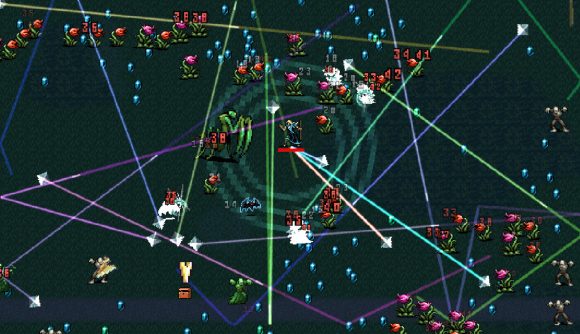 If you keep an eye on the Steam charts or any number of YouTubers focused on highlighting indie games, you might’ve seen a little thing called Vampire Survivors. Billed as a “gothic horror casual game” that lets you “be the bullet hell”, the simplistic charms of Vampire Survivors is quickly propelling it to breakout hit status.

Vampire Survivors is a run-based twin-stick shooter that, effectively, has only one stick. You move your character manually, but your attacks are all automatic. Each character has their own starting ability, like a whip that swipes in the direction you’re facing, or a magic projectile that fires in the direction of nearby enemies.

Each enemy drops an experience gem when they die, so you’ve got to make your way through the hordes while picking through their remains. Each time you level up – a process that takes mere seconds to start – you get a new weapon or upgrade. Maybe your whip can fire in both directions now, or you shoot multiple magic bullets at once.

Then, presumably, you get to whatever the heck is depicted in this trailer.