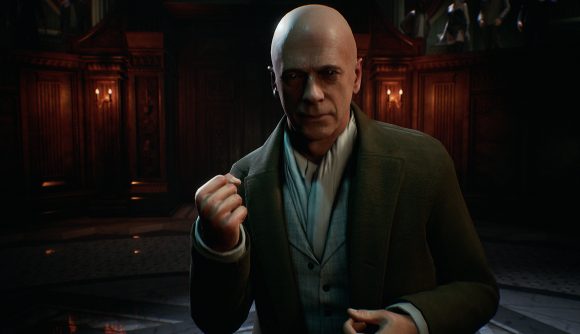 Earlier today, Vampire: The Masquerade – Bloodlines 2 disappeared from the Epic Games store. The game was never an exclusive there, and is still available from other PC stores including Steam and GOG. The sudden removal is because of the first Epic Games store sale, which went live today, and offers a $10 USD discount for any game priced above $14.99.

That discount applies even to pre-orders of upcoming games, and according to John Wick Hex developer Mike Bithell, Epic is covering the difference for developers. Nonetheless, Bloodlines 2 publisher Paradox has opted out of the sale, and hasn’t publicly provided a reason why.

“If a developer or publisher chooses to not participate in our sales, we will honor that decision,” an Epic Games spokesperson tells us. “Paradox Interactive has chosen to not participate in the Epic Mega Sale and the game has been temporarily removed from sale. If players purchased Vampire: The Masquerade – Bloodlines 2 during the period when the discount did apply at the time of check out, Epic will honor that price.”

We reached out to Paradox for comment, and Jesse Henning, public relations manager at Paradox Interactive told us that “We are in discussion with Epic regarding the temporary removal of Vampire: the Masquerade – Bloodlines 2 from the Epic Game Store. The game will return to the store soon! Any purchases made while the game was discounted during the Epic Mega Sale will be honored and no Masquerade violations will be assessed.”

It’s likely that the publisher has opted out of the sale to avoid cannibalising its sales afterward or on other platforms – why buy at full price when it’s already been $10 off, after all – though until we hear official word on the reasoning, you can treat that as pure speculation.

The discounts on the Epic sale have been surprisingly good, and the discounts are set to continue for the next month. The Steam summer sale dates have also leaked, and that event will be starting up in June. It’s safe to expect no early discounts on Bloodlines 2, either way.