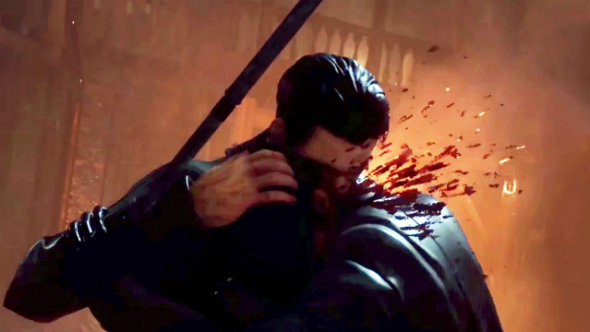 Dontnod Entertainment have finally popped their Gamescom gameplay demo up on YouTube for everyone who didn’t head to Germany to get lost in a fleshy tide of nerds last week.

The Life is Strange developers have taken a drastically different tack on this one, casting you as a doctor in the throes of the “Spanish flu” epidemic of 1918 afflicted with something far worse: porphyric haemophilia. Also known as vampirism.

While coming to terms with your newly deceased status, you must sate the hunger for blood while also trying to navigate a London ravaged by the worst outbreak since the Bubonic plague.

The gameplay demo shows many of the activities you’ll be engaging in, specifically combat with vampire hunters using what looks like a machete and, at one point, shadow powers.

Your shadowy vampire magic also lets you see bios of the walking blood sacs around you and helps you determine who among the populus has good quality blood, to keep you full for longer, and who has tuberculosis. Y’know, like looking at the cereal aisle and seeing own-brand cocoa puffs versus Shreddies, which keeps your hunger locked up ’til at least the next cutscene.

The Life is Strange heritage comes in during these non-combat sections where chat wheels allow you to potentially extract information from a character in the game using items found earlier, or attempt to provoke an invite of entry to their house which suggests Vampyr follows the Buffy rules of vampire safety.

Also, when that goes wrong you can use your dark sorcery to lead NPCs down dodgy alleys and relieve them of their haemoglobin, delicious. The end of the gameplay demo seems to suggest that the Spanish flu is being interpreted as more of the “fictional basis for zombie movies” Spanish flu than its historical counterpart, so look out for more varied enemy types in the final game.

Vampyr’s currently slated for a vague 2017 release date, giving you many more days of sunlight to avoid before then.