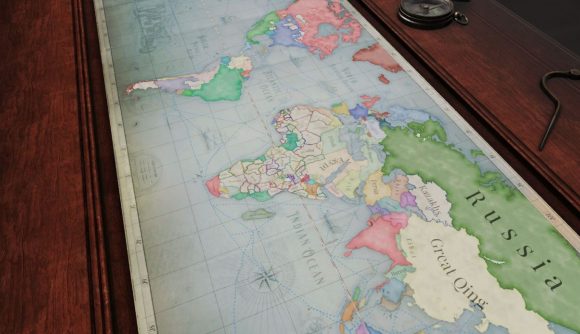 Given that it’s set between 1836-1936, upcoming grand strategy game Victoria 3 has colonialism as one of the major political forces at play in the game. However, the Victoria 3 dev team is making some important changes to the way colonisation works over the ways it’s been handled in the past.

As a new dev diary explains, in Victoria 3, colonies don’t typically start out with a war. Instead, ‘centralised’ nations – the kind that have historically gotten to have their names on the maps – can establish colonies in state regions controlled by decentralised nations, once they’ve researched colonisation laws and declared an interest in the area. When you establish a colony, you’ll start with a single province in that state region – you won’t have an instant monopoly on the area.

As your colony grows, there’s a chance that it will generate tension with the decentralised nations in neighbouring provinces, and if that gets too high, those indigenous populations can launch a native uprising, which in Victoria 3 is considered a type of diplomatic play. This could result in the natives expelling the colonisers from their homeland, and while the colonial powers usually will have a significant technological edge, they’ll need to worry about the logistics of moving military forces and equipment to and from the area. The natives will be fighting with home field advantage.

To further complicate matters, the native population might not be fighting on its own – since native uprising is a type of diplomatic play, other nations who have an interest in the area can join in. Their motives may be far from noble, but you might find France backing a Baka uprising in Africa just to stick one to their colonialist rivals in England.

On its own, tension will gradually decay, but Paradox says that most things you do in your colonies will create tension faster than it has a chance to reduce naturally. On top of that, colonisers will have to worry about some of the practical problems that come along with showing up in a completely foreign climate: malaria and other hostile conditions will make it extremely difficult just to keep colonies alive, at least until you’ve invented quinine.

In all, it seems like a pretty fresh approach over the ways Victoria has dealt with colonies in the past. We’ll find out more when the Victoria release date arrives, whenever that winds up happening.