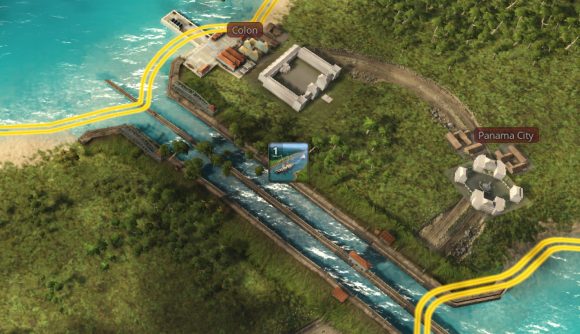 As in other grand strategy games, Victoria 3 will allow players to build and control monuments. These are unique buildings that each have their own sets of inputs and outputs, and they’ll also grant modifiers to the region where they’re built or the controlling nation. The latest Victoria 3 dev diary discusses monuments, with a special focus on the Suez and Panama canals, which you’ll be able to plan and build over the course of the game’s timeline.

At launch, Paradox says it plans on having 11 monuments scattered around the world, although not all of these will be in place at the 1836 start date. When Victoria 3 starts up, several monuments will still need to be constructed, and the two major canals – the Suez and Panama – have special event chains and processes associated with them to make their construction appropriately challenging.

Naturally, you’ll want to control a canal. The Suez is a shortcut between the Indian Ocean and the Mediterranean Sea, obviating the need to sail all the way around the African continent. The Panama canal is another strategic asset, connecting the Pacific and Atlantic oceans and saving ships from a long and dangerous voyage around South America.

To build either, you’ll first need to conduct a land survey – something you’ll be able to do either as the nation that controls the territory in question, or as a great power with a recognised interest in the area. Surveys cost lots of bureaucracy to conduct, and they take around three years to complete. Of course, that’s before you even bust out the shovels to start digging.

The diary has sparked off a bit of discussion from concerned Victoria fans, who fret that monuments as described appear to be following the model of Civilization’s wonders or the monuments in Europa Universalis IV – granting sometimes confusing bonuses to nations who’d historically have gained nothing from having a particular building.

Paradox’s developers say they’re incorporating that feedback into the design, but stress that not having monuments at all seemed a lot stranger to them than using the bonus system found in EUIV and other strategy games. The devs also explain that, like other buildings, monuments are extremely moddable – you can even remove them from the game if you don’t like them.