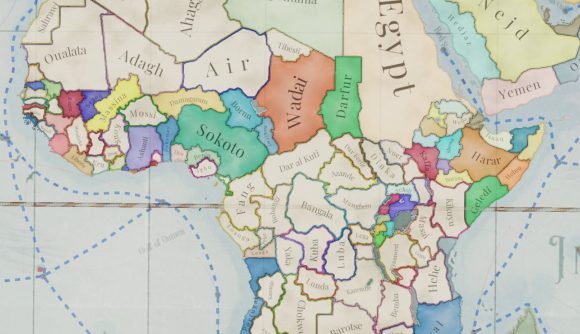 The latest dev diary for colonial era grand strategy game Victoria 3 goes into some additional detail on its new approach to colonisation. This week, the team talks about the concept of ‘decentralised nations’, an umbrella term for the indigenous populations present all over the world, and who will be meaningfully represented for the first time in Victoria’s third instalment.

In the past, Victoria games have treated the world much the same way as the European imperial powers did during the era – essentially, that it’s full of unclaimed land ripe for the taking, and anyone you happen to meet while you’re there isn’t of any real consequence. In both Victoria: Revolutions and Victoria II, most of the African continent is essentially a blank canvas, only taking on place names and borders once it’s been colonised.

That’s all changing in Victoria 3. As content designer Ofaloaf explains in the new diary, the team have been digging into any available research they can get their hands on to fill in those ‘blank’ areas on the old Victoria maps, adding territories for African peoples such as the Azande, Tswana, and Masai. North American peoples, including the Pueblo, Ojibwe, and Shshone are represented, along with dozens of others.

Ofaloaf says that many of these are still in a state of flux on Victoria 3’s map, and will probably continue to see updates and changes throughout development – and beyond – as the team collects more information on each group.

In some cases, Ofaloaf says, small groups have been consolidated with other local groups for gameplay reasons.

“400 pops living in State X aren’t able to provide enough men to contribute a single battalion to a native uprising, among other things,” Ofaloaf writes. “This design isn’t just for the decentralised nations – it is something we also do elsewhere in the world when trying to balance historical accuracy with gameplay, although we of course try to avoid steering too far away from actual history.”

While decentralised nations won’t immediately try to stop you from establishing a colony in their territory, they’ll become increasingly resistant as you press further into their land. Eventually, they’ll launch a diplomatic play, which can potentially turn into a war for independence.

This is a pretty game-changing addition to Victoria 3, and a welcome one. Ofaloaf says the hope is for it to not only enrich gameplay, but to provide “better representation of indigenous peoples.”

“No matter where an empire tries to colonise,” Ofaloaf writes, “someone already lives there.”