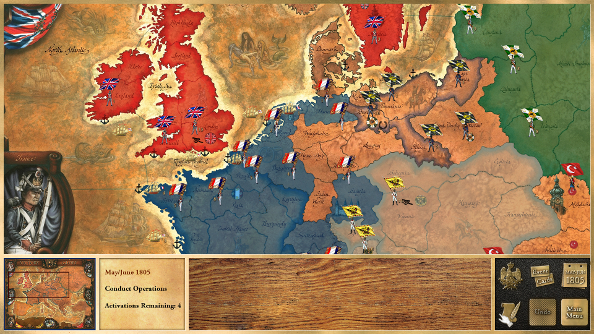 For our inaugural article, we’re taking a look at the board game-influenced Victory & Glory: Napoleon, as well as talking to its creator, Glenn Drover.

There are few generals that are well-known enough to have not one but several games named after them, but for Napoleon, a man who even had an era titled in his honour, it shouldn’t come as a surprise. Victory & Glory: Napoleon is the latest strategy game to be based around the dictator’s military exploits.

Set between 1800 and 1818 and split up into six historical scenarios from the War of the Second Coalition to the invasion of France, Victory & Glory is a grand strategy game with a focus on tactical battles. Both its presentation and mechanics are immediately evocative of board games, which is no surprise given that board game designer Glenn Drover, who developed the adaptations of Age of Empires III and Age of Mythology, is at the helm.

“Strangely, I play more PC games than board games, so I think that I have good exposure to both worlds,” says Drover. “Where I believe that my experience designing board games has helped on this project was to be able to bring the best of both worlds together.”

While most grand strategy games offer up a multitude of factions to play with and avenues to take, Victory & Glory is decidedly more focused. Only France is playable, and the nation is always at war with Great Britain, the game’s antagonist. And while there’s a diplomacy system, historical events and political actions, it’s really war and battle that’s in the spotlight.

Drover wanted Napoleon, and commanding France, to be at the heart of the game, because his task was so massive: a continually evolving war against Europe’s superpowers, the reorganisation of an entire nation, and sweeping changes to the political, legal and military systems. However, with the game now on the cusp of launch, Drover is contemplating new challenges, like allowing players to take control of Great Britain and fight France.

A map of Europe and North Africa is Napoleon’s playground, a patchwork quilt of nations and factions, allies and enemies. It’s from this map that players will move their troops and ships across land and sea, engaging enemy armies in initiative-based battles and gobbling up provinces to expand France’s power. 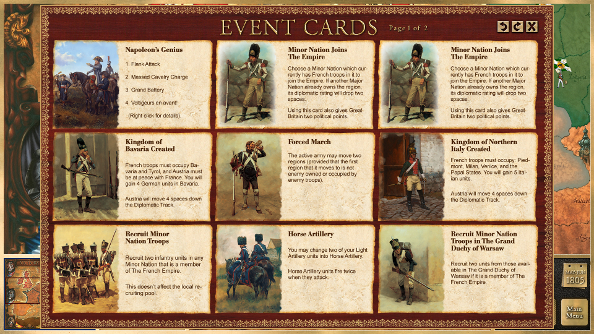 Fights begin with the player selecting their units, as well as the units of any allied power assisting in the battle, arranging them in battle lines. The best plan of action is to build a strong defensive line with units that can take a beating, clear the way for men and horses by using artillery, and then strike at the flanks. That’s the absolute basics, though, and a slew of additional elements like generals, support and unit placement create an extra layer of complexity.

“The combat system, while somewhat abstract, contains quite a few complex formulas to take into account things like squaring, influence of generals, support from nearby units, etc,” explains Drover.

Victory & Glory: Napoleonlookssimple, at a glance, without many menus or things that might divert your attention from the business of war, but under the surface there’s a lot going on, particularly during the battles; things that would have made a board game, with their “simplistic and streamlined methods of calculating things,” according to Drover, too fiddly. Good thing it’s on PC, then.

Our ‘The World in Wargaming’ series is created in association with Slitherine. Victory & Glory: Napoleon is out today.