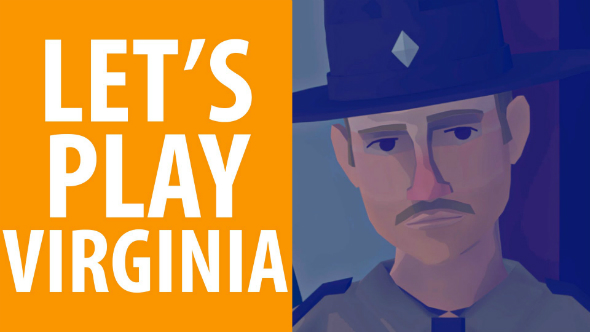 There aren’t really words to describe how baffled, befuddled and disombobulated we were playing this offbeat adventure game whilst enduring a slight hangover. Why isn’t anyone talking? Why is there a buffalo in the road? Why do we keep hopping between moments in time and space? And for goodness’ sake, why isn’t anyone talking still? Still, our suffering is your reward. Enjoy.

Enjoy a drive without the four-legged interruptions? Try our favourite racing games for PC.

Phil and Joel played a teaser passage of gameplay from the upcoming Virginia, intended to give a taster of what’s to come on September 22 when the game releases. It’s brief but powerful, and hits on some trendy pop culture touchstones that’ll get it in front of David Lynch fans without doubt.

If you’re looking for an expert playthrough of this passage though, look elsewhere. We get stuck in a cupboard. We try talking to people who flatly ignore us. We can’t find stuff. We can’t figure out what to do with the stuff we find. It’s… well, it’s what happens when you play an adventure game for the first time, basically. Unless you’re Tim Schafer.

If you get a kick out of watching us play games, you know what you should do? Subscribe to PCGamesN on YouTube. Yes, do that.