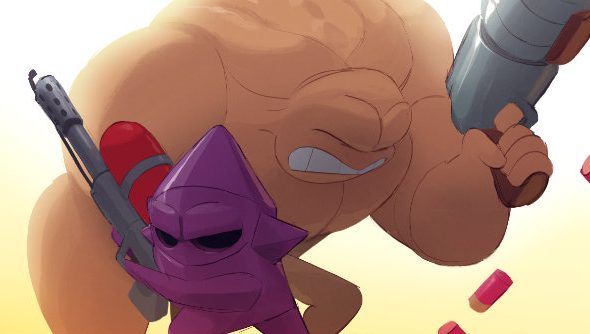 Update April 11, 2017: G2A have responded to comments made to us by Vlambeer co-founder Rami Ismail last week, saying keys that are scammed by email are classed as legitimate because they come from developers.

“As you can see on the example of Rami Ismail, keys are legitimate, because they come from the developers,” Maciej Kuc, head of PR at G2A, tells me via email. “No one else is able to generate game keys.”

There are plenty of free PC games to get stuck into if money is tight.

That’s not to say they’re excusing the behaviour, however. They just don’t see it as their responsibility.

“We are sorry that there are people who are swindling keys and pretend to be YouTubers, but this is totally different situation than someone who buys keys with stolen credit cards,” Kuc explains.

“And in this situation most marketplaces would do nothing, but G2A offers G2A Direct – a developer support program from which Rami Ismail can get up to a 10% fee from the sale of his products by any third-party sellers, not to mention a great number of other interesting features.”

Original Story April 7, 2017: Gearbox have just rather publiclysplit from G2Aafter a public outcry over their Bulletstorm: Full Clip Edition retail partnership. This breakup has prompted the conversation surrounding game key marketplaces to spring up once again. Last year, one developer told us he’d rather people pirated his game than buy it from G2A. Almost a year later – despite G2A declaring they’re taking steps to become legitimate – it seems not much has changed for game developers.

Vlambeer cofounder Rami Ismail sent out a couple of tweets tonight about why he’d rather people pirated his games than use key marketplaces to buy them. Essentially, he’d rather he made no money from a game than someone else profited from his labour just for illegitimately getting hold of a key. It’s not all just down to stolen card purchases, you see.

“Key reselling is our work making money for a third party we have no connection with, and we don’t have a distribution deal with. None -or very little- of the income goes to us,” explains Rami. “The bigger issue is some of the costs go to us. A lot of the keys up for resale come from key scammers, people pretending to be famous content creators, YouTubers, streamers, or press. Filtering real requests from scammers takes a ton of time, and it is extremely demoralising getting an email from someone that could mean a breakthrough for your game, only to find out the email address is [email protected]”

Rami says he gets “dozens” of requests a day, so trying to proofread all of them for telltale errors is taxing work. “Sometimes they’re hard to distinguish from real requests unless you pay close attention,” he says. “Making games is hard work, and having money to spend time on your passion is a huge part of it. Key resellers can hurt both that income and that passion, all for a cynical way of making money for someone else.”

As for pirating, obviously Vlambeer would rather everyone bought their games legitimately, but there’s a clear difference between pirates who want to play a game they can’t afford and con artists looking to make some fast cash.

“Pirating isn’t ideal, but I understand that there are people that would like to enjoy Vlambeer’s work in situations or countries where they cannot buy or afford those games,” Rami explains. “Obviously, I’d still love for them to be able to enjoy the games, spread the word, and maybe be inspired to make their own work. We’ve received many encouraging or apologetic emails from people pirating our game, and they raise our spirits.

“The emails from scammers, they just remind us that someone, somewhere, is looking to earn a quick buck at the expense of our work, time, and motivation.”