A master of the universe. That’s how Sherman McCoy – the fictional bond trader in The Bonfire of the Vanities – thought of himself and those few others able to pick up a phone on Wall Street and make a $50,000 commission, just like that.

Related: the best space games on the PC.

But even McCoy in his most self-absorbed flights of egotism never imagined cruising from Mars to Mercury to collect the gains from his agricultural operations – all the while watching the cash roll into his account from the strip mines of Uranus. Stop sniggering: you won’t be laughing when you hear how much I earn in a minute. Greed might be good back in New York, but here in space, it’sfucking great.

You’ve got to spend money to make money. Speculate to accumulate. Make your money work for you. Every bullshit Wall Street maxim you’ve ever heard would feature in the walkthrough for Vostok Inc., the first twin-stick shooter about capitalism I’ve ever encountered.

As Vostok’s CEO, it’s your job to zip around a 2D, ‘80s-flavoured approximation of our solar system, accompanied by a suit-and-tied advisor speaking over a cellphone as big as his head. In your tiny yet powerful spaceship, the vast distances between the planets of Sol are rendered as insignificant as the afternoon concorde from Heathrow to JFK. 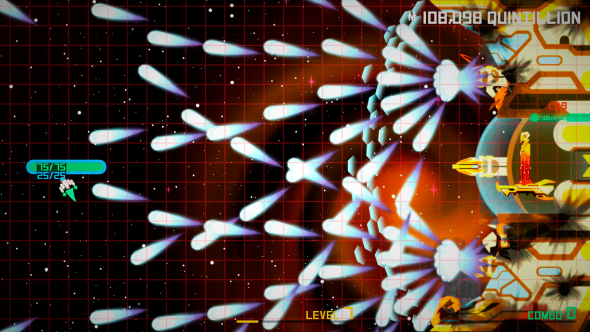 Of course, the concorde never had to contend with the fighters and frigates of organised crime families. As you go about your business, enemy ships tend to swarm like insects, eager for a 200% cut of your earnings. And you can fight back using a simplistic but time-tested method: left stick to dodge, and right stick to direct a stream of fire.

Your opponents are a creative and varied bunch: ship-carriers that launch streams of kamikaze bombers; static targets that fire so many bullets they force evasive maneuvers; centipede-like enemies that threaten to squeeze you into submission and explode into segments when shot, becoming harder to hit. But your methods of dealing with them are one-note, and the fighting wouldn’t hold your attention for long without the other part of the game: the money.

Land on a planet and you can industrialise it, turning Venus’ organic materials into chemical energy, or extracting the riches buried deep beneath Neptune’s surface. Then you can leave for a bit, get caught up in a deadly ‘screen-lock’ fight with the space mafia, and return to find your ‘moolah’ piling up. 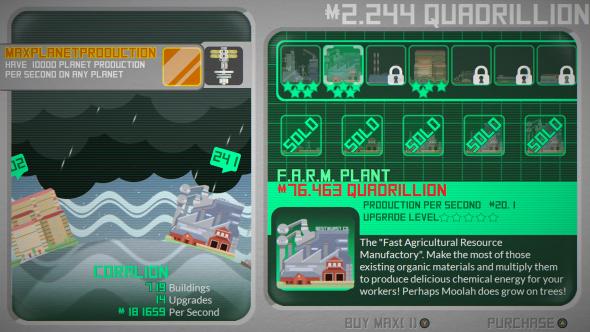 You’re best off funnelling that cash straight back into the business, increasing your yield with upgrades like heavy duty machinery (“Take that Mother Nature!”). Soon you’ll be flush enough to buy a space tracker that registers the position of your most profitable planets; that’s preferable to chasing them through their orbits, wiseguys in tow. And even better, satellites that transfer your earnings directly to your ship, negating the need to land except to survey your domain.

Eventually, it becomes like that old urban myth about Bill Gates, stopping to pick up a dropped $100 bill and making $500 by the time he’d straightened back up again. Now, when I glance away from the screen momentarily to check my phone, I find I’ve made 500 moolah. Enough to build more farms on Jupiter. And by the time I’ve finished writing this sentence, I’ll have made another 2k.

Money is one thing, but you want to know the secret to job satisfaction? Keeping Vostok Inc. minimised in the taskbar while you work.

Tell you what, though: Tim Curry is going to be disappointed.