The first season of Telltale’s The Walking Dead was an exhausting, emotional journey filled with broken, miserable people and gut-wrenching choices culminating in one of the most affecting scenes I’ve ever had to play through. And here we are, at the start of season two, being asked to go through hell all over again.

If you thought Telltale would be pulling their punches because Clementine is in the driver’s seat, think again. All That Remains is a savage, Darwinist episode that sometimes makes you forget you’re playing a little girl, and then when you remember her age, you want to curl up into a little ball and stop playing. But you can’t.

Tragedy. That’s what All That Remains begins with, making no bones about the fact that the world of The Walking Dead is still a horrifying place populated by desperate people. Guilt, too. It’s an introduction that aims its punch straight for the gut. Lee’s dying wish at the end of season one was for Clem to find Omid and Christa, hoping they could keep her safe. He was wrong. 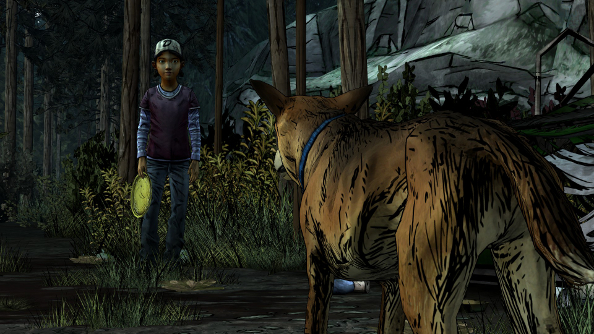 But Clem’s not the vulnerable child she once was. In the two years since she had to kill Lee, she’s developed an edge; a coldness born out of necessity that’s almost heartbreaking to witness. Initially, despite clinging onto her gun – the very weapon she used to end Lee’s suffering – she’s still vulnerable, but I found myself subtly being pushed into playing her less as a scared child and more as a pragmatic survivalist. Killing. Lying. Stealing.

And that’s when it hit me: this is what she saw Lee doing. I tried so hard to do “the right thing” in season one, but in the end it stopped mattering, and I was entirely focused on protecting Clem, leading me to do some pretty awful things. “Clem will remember that.” So she’s the product of Lee’s education, and while the game clearly nudges you in that direction anyway, I can’t help but feel that it’s my fault.

There are actions I took that I’ve tried to justify, and almost succeeded. I befriended a young girl who creeped me out, promising to be BFFs just so I could get her to help me, and that was okay, because I desperately needed that help. I stole from other survivors, breaking into their home and rifling through their things, and that was okay, but they’d treated me like shit and I needed their stuff more than they did. 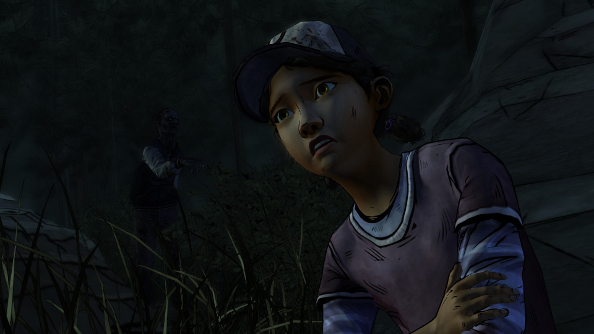 It wasn’t until I started making threats that I felt like I was going down a dark path. A pregnant woman, another survivor, isn’t exactly Clem’s number one fan. She doesn’t trust her, and she doesn’t want her to stay with the group. But Clem knows her secret, one she’s been keeping from her friends and her man. “You should be nicer to me,” she says. And then she just stares for a second. Bit by bit, her innocence is being swallowed up.

Telltale hasn’t toned down the gruesome violence, and the world treats Clem the same way it would treat an adult survivor. She’s hunted down, chased by the undead, attacked by animals – if anything the action has increased, taking a cue from the more elaborate contextual action sequences from The Wolf Among Us. But unlike Bigby, or even Lee, Clem can’t stand toe-to-toe with a walker or a grown man, relying on determination and a lot of luck instead of strength.

The stakes seem higher, that way, as these sequences are more desperate and the victim so much younger. I only failed once (though to call the moments where I didn’t fail “victories” would be ridiculous, you never win in The Walking Dead), and while, yes, I did see Clem die, all I was shown was the lower half of her body go limp: it’s still shocking to witness, but it doesn’t quite cross the line where we have to witness the brutal murder of a child, thankfully.

Its in the quiet moments, the melancholic soundtrack the only noise, where All That Remains shines, however. Clem staring at a grave, finding a picture of a family in a derelict campsite, wandering through the woods alone and scared. For a game with so much dialogue and violence, it’s impressive that Telltale still knows the power of silence. When she’s on her lonesome, we are forced to remember that Clem is indeed still a child, and for all of her steely determination, she can’t survive for long with nobody to help her, no matter how much she tries to go it alone. But finding people to trust, or even just people who trust her, is a challenge in a world where everyone has become trained to view strangers as threats – even little girls.

The new survivors get pushed to the side so that we can be reintroduced to Clementine, and when they do get some time in the spotlight they serve as plot devices, really just options for Clem to pick – who do you save? Who are you nice to? There are instances where they interject with anecdotes, giving them some opportunity to grow as characters, and there’s certainly a couple with some potential, as allies or for conflict.

The focus on Clem is far from a problem, though. She’s by far one of the most compelling child characters I’ve come across, and by putting us in control of her, we’re given a new, even more harrowing perspective on the zombie apocalypse that Kirkman crafted. She doesn’t talk about her experiences prior to this episode much, but in a dimly lit dining room, surrounded by flickering candles, eating the first meal she’s had in god knows who long, she finally opens up about Lee. It killed me.

Of course, that scene could play out very differently in another game, with Clem staying quiet, not wanting to let anyone know about her past or about what she had to do to her protector, and it would become a tense, awkward moment revealing a little girl who can’t trust anyone, rather than someone coming to terms with a horrible event. 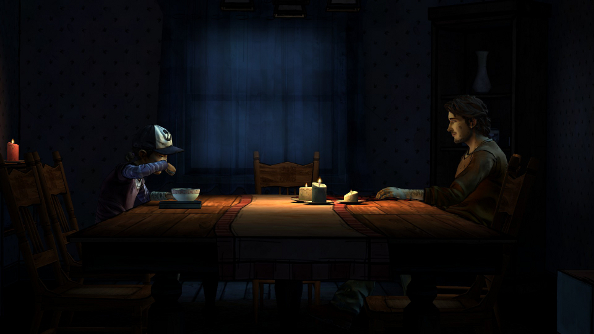 Mechanically, All That Remains brings nothing new to the table. You walk a little, very occasionally interact with an object, and chat a lot. It worked perfectly in season one, and the narrative that drove the series forward was so well constructed, the characters – for the most part – exceptionally written, that I rarely found myself concerned by the lack of traditional adventuring. But after five episodes and the DLC, I find myself wanting a little bit more.

There’s a particularly poor stealth section with Clem creeping around a house, and it’s both almost entirely on rails and doesn’t really involve any stealth. She just wanders around while creeping, and the section never puts any demands on the player. The risk is an illusion. It’s a shame, because if it actually forced players to actively avoid other characters, moving from hiding spot to hiding spot, always wondering if someone is just waiting to grab you, it could have actually been engrossing, while also emphasising Clem’s vulnerability and the need for guile.

Despite wishing there were some bold new design choices rather than it being an adventure that sticks to Telltale’s tried and tested methods, All That Remains is still a powerful introduction to The Walking Dead’s second season. Where it does mix things up, with the drastic change in protagonist, it does so with surprising sophistication, changing the tone dramatically. I feel awful, now that it’s over, but I can’t wait to jump back in again.