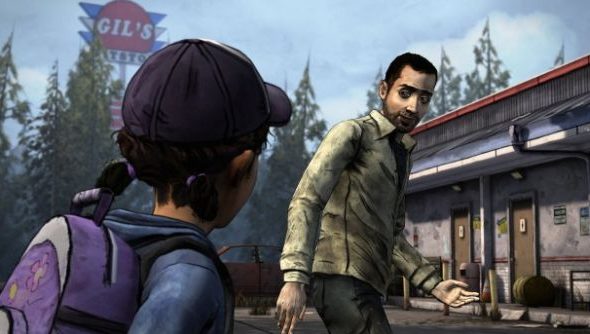 I’d been under the impression that, once the stewed apple was all gone, Christmas was for polishing off 400 Days and gnawing absent-mindedly at The Wolf Among Us during the Doctor Who special. But in clear and public contravention of my plans for DLC released three months ago, Telltale have ploughed ahead with the next season of their heart-punching Walking Dead series. The first episode will be out before the end of December.

All That Remains will feature sweet, traumatised Clementine as protagonist, plus not-Lee, Season 1 and 400 Days veteran Omid. You can see both of them together there in the header image.

The backdrop is Gil’s Pitstop, the location in and around which the events of 400 Days unfolded. And there ends all we know about Season 2, bar a scene-setting sentence from Telltale:

“Now assuming the role of an ordinary child, players will struggle to outwit both the dead and the living in situations that will test their morals and control the flow of the story through their decisions and actions.”

So long as I get to test my morals against everybody else’s in the concluding statistics, I’ll be happy. Knowing I’m about as awful as the rest helps ease the guilt somewhat. Do you lot find that?