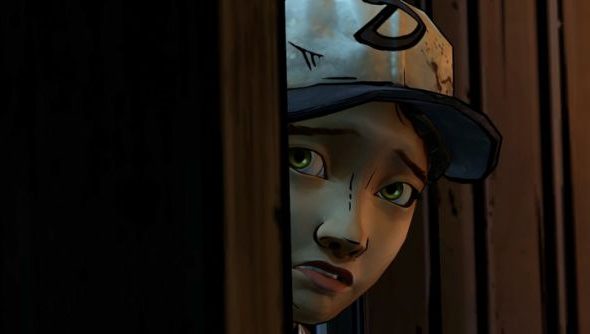 Juxtaposition! Light and dark. The people in here at the motel, and the things out there. Evocative acoustic guitar, and soundless horrific events. It was compelling in The Walking Dead Season 1, and it works here in the trailer for its second season, due to begin next week.

Spoilers for Season 1 abound, by the way.

As the horrors of Season 1 slip by, you start to get a sense for the psychological makeup of Clementine, and the part we as players had in patching it together. Now we’ll have to shoulder those memories ourselves as we take control of her directly:

“You’ve gotta consider her a living person, that’s it. You’re either living or you’re not. You ain’t little, you ain’t a girl, you ain’t a boy – you ain’t strong or smart. You’re alive.”

I did worry about the idea of having Clementine as a protagonist. In The Walking Dead’s first season, she was the anchor that prevented Lee from upping sticks and leaving the nutters he’d landed with; the mostly-silent witness and sounding board for all of his potential crimes.

Now we’re her, that’s gone. But it looks like we’ll be shouldering another kind of responsibility – in keeping all of the adults who seek to mother or father Clementine from ripping each other to bits or being killed in their inertia.

Episode 1, All That Remains, hits Steam on Tuesday December 17. It looks like a really interesting game, don’t you think?