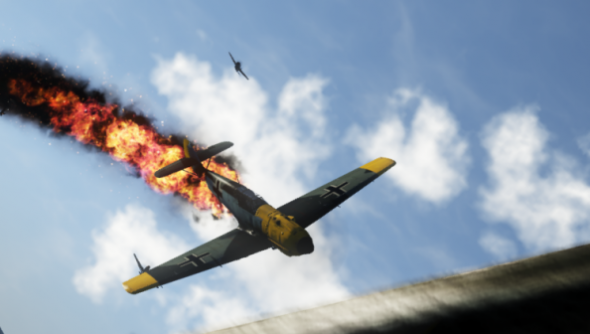 You should have heard of it by now, too, yet it’s had only cursory coverage in the western games media. Still, that hasn’t stopped the over 500,000 players signing up for the open beta, climbing into their cockpits and peppering each other with holes for hours on end.

Previously known as World of Planes, War Thunder is a tremendous air combat game that has ambitions to move beyond just including aircraft, as developers Gaijin Entertainment also want to incorporate player-controlled tanks and battleships on the same map. In other words, it wants to be World of Warplanes, World of Tanks and World of Warships all rolled into one.

And that could be just as exciting as it sounds. On the surface, it looks very similar to Wargaming.net’s titles, with the same free-to-play mechanics and spindly tech tree, but once you’re in the cockpit it’s a completely different experience. Flying is just such fun. The game is marvelous and I barely know where to begin.

For a start, it handles quite differently to World of Warplanes and, without very much compromise, is much more forgiving to play, with a flight model that’s a canny balance balance between arcade and simulation. It’s easy enough to allow new players a chance to learn the ropes (and fly planes from a third-person perspective), but it doesn’t toss physics out the window, rewards good piloting and still manages to make the various classes of aircraft behave quite differently. Naturally, a fighter is far more agile than a bomber, and an aging biplane will never outrun a jet interceptor, but whatever you climb into you won’t be struggling with simulation-level accuracy. Everything is perfectly playable with a mouse and keyboard but there’s also support for joysticks and, if you want it, a cockpit view. As any pilot would expect, banking and climbing eat up your airspeed, a vital currency in any dogfight, while diving too fast puts strain on your airframe and could shake your plane apart. If your airspeed drops too much, you can feel your plane start to stall and many aircraft have undercarriage and airbrakes to consider. Most of the time, though, you’ll be thinking about your next attack run and where you want to point your guns. War Thunder isn’t about fuel management and oil pressure, it’s about shooting your way out of swarming, 32-player dogfights.

Then there are the maps. You might think that flying doesn’t offer much hope for interesting maps: there’s not exactly an abundance of cover and terrain at 1,000 ft. Well, you know what? Scratch that, because about half of War Thunder’s maps are all about canyons and valleys and mountain ranges. Sure, you can soar above these and stare down at the aircraft duelling below you, but when your objective is to wipe out all the enemy ground forces before they take out yours, sooner or later you’re going to have to weave your way between those peaks, ducking and diving as anti-aircraft fire blossoms around you like confetti at a wedding. A wedding of war. To more war. At the moment, the open beta’s maps task you to either hold airfields, which demands some poor teammate try and disengage from combat long enough to touch down on one, or to contribute to a battle of attrition that has AI-controlled armies clashing below while you duel other players in the sky. This means you get to fight other pilots, to strafe tanks and armoured cars and, on one map, even have the chance to attack enemy ships at sea as two large fleets face off along the coast of Kent. Cue nail-biting torpedo runs as you line your plane up with an enemy cruiser, the sky aswarm with other players who know exactly what you’re trying and won’t let you sit still for ten seconds.

Now, I mentioned fighters and bombers, didn’t I? As you begin the game you’re presented with elaborate aircraft tech trees, trees which grow from simple 1930s biplanes at their roots and bloom into beautiful post-war jets. These are gradually unlocked by spending the in-game currency and experience that you’ll accumulate through playing, taking your planes into battles of up to 32 players and fighting to control of the skies or wipe out enemy ground forces. So far, so familiar. And they all look gorgeous, much as battle itself is beautiful. As you take to the skies, the sun catches your fuselage, it glints on the tips of your wings and it washes across the surface of the ocean, turning it to a sea of gold. While the terrain below you may not be particularly remarkable up close and the textures are nothing special when you’re flying three meters above them, the maps are still packed with detail. There’s the intricate villages, the sprawling towns and the fortress towers that guard mountain valleys.

The planes look just as good in the air, too. Dozens and dozens of faithfully-modelled aircraft that start each battle shiny and clean, only to depreciate in value as they’re peppered with bullet holes or have sections blown off. The game tracks damage to several different areas of your aircraft and this can affect their handing, speed or even fuel levels. Should they go down in flames they’ll be rebuilt anew for you in your hangar, where you can spending time examining and refitting the ones you already own, as well as browse all the aircraft you haven’t bought as if you were a customer waltzing your way through a showroom. War Thunder’s free-to-play mechanics give you the opportunity to buy your way up the tech tree if you don’t mind reaching into your wallet. It also presents you with a handful of premium aircraft that can only be gained by spending real-world money, but most of what the game offers can eventually be earned as long as you’re willing to put the time into playing.

There are five of these many-limbed tech trees to browse, representing British, Soviet, Japanese, German and American aircraft, and they’re already bristling. Their branches are divided into categories that include torpedo bombers, fighters and even multi-engined heavy bombers like the Lancaster, which are covered in machinegun turrets and haul tremendous payloads that, if dropped on target, could turn the tide of a battle. These larger aircraft give you a chance to take direct control of those turrets if you fancy a change of perspective, but they can also be capably crewed by the AI, who you can upgrade by spending experience. Whatever nation’s plane you take out of your hangar is what you go into battle with, not the side you fight for, so each battle becomes a multinational hodge-podge, but while World of Warplanes has you taking just a single aircraft with you, War Thunder lets you use an entire hangar’s worth. If you enter a battle with your British planes, you enter it with all those planes, effectively giving you as many lives as you have aircraft. Say, for example, your hangar includes a Spitfire, a Hurricane and Lancaster. That would give you the chance to spawn three times, once per plane, meaning you could contribute to the battle as both a bomber and a fighter pilot.

It also means that, as the battles rage on, players may have to take to their backup planes. Battles are matched according to the highest tier of plane you take with you, but if the rest of your nation’s hangar is inferior aircraft then, sorry sonny, those are what you’re stuck with when your favourite flyer hits the deck. This results in battles that, as they rage on, force players to haul out increasingly dilapidated aircraft or, in some cases, see them save their best plane for last. This is also where the game can get quite punishing, as it can result in some horribly unmatched dogfights. Whatever class of plane they might be, higher tier aircraft are almost always faster and seriously up-gunned, and a slow-moving biplane will be slaughtered by a 20mm cannon. It’s not much consolation to know that aiming for the enemy cockpit offers anyone the chance of a quick kill. I am a little concerned that these hangers present the possibility for some players to engage in pay-to-win tactics, as adding extra planes to each nation’s hangar initially costs you only in-game currency, but if you want to expand beyond five then you can do so by spending real-world cash. This means players who pay will get more lives, and while battles can be won by destroying enemy ground forces or taking objectives, victory also comes when one side has exhausted their supply of planes. I haven’t yet seen much evidence that players are doing this, but it’s nevertheless a possibility. At the moment, everyone seems more interested in spending their money on custom decals and gaudy paint schemes.

Still, I’ve had a glorious, glorious time in this game because it’s so immediately accessible and so packed full of things to do, things to fly and things to shoot at. There’s the godawful PBY, a flying castle that’s covered in turrets, there’s the sleek, deadly fighters like the Hurricane and the Me 109, and there’s the heavy-hitting attack aircraft like the IL-2 and the Mosquito. I’m very excited to see what happens next with War Thunder, which has been in beta for around a year now, and I’m particularly keen to see what progress the developers make with how both ships and tanks will work. I think most of the game’s audience are still players in Eastern Europe, but Gaijin Entertainment are running English-language EU servers and trying to reach out to gamers further afield, something that is cutting the queue time for arcade battles (currently around thirty to sixty seconds, “historical” battles take ages and nobody attends them). Whatever comes next, I would very much recommend you give it a try as soon as possible: preferably right now, because I’m sick of having hardly anyone else to talk to about it.

Hold on, though. Let me say a few last things before you take off for the first time: