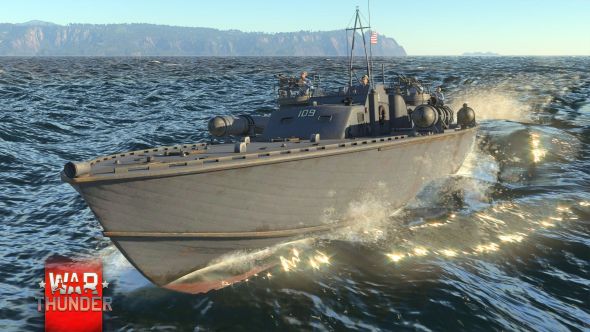 Ooo, I remember when it was all planes. War Thunder, the enthusiastic land and air World War 2 simulator that plonks players in a mountainous section of countryside and asks them to rat-at-at it out, will shortly do sea too.

Gaijin are introducing a newly-designed mode for battles involving ship to ship, ship to air, ship to land and probably every other naughty naval position you can possibly imagine.

There’ll be a closed beta later this year, in which the developers will test their theories about simultaneous combat that compliments War Thunder’s existing systems without slowing it down.

Expect torpedo, artillery and missile boats, as well as coast guard and patrol vessels – basically anything on the smaller side that served in the oceanic theatres of WW2. It’s an intriguing approach that casts battle cruisers and aircraft carriers as “floating cities”.

“Classic large ship battles during the war were contests of patience and planning, where engagements could last from several hours to several days,” explains creative director Kirill Yudintsev. “For this reason we are leading with fast attack-based craft, which are rarely reproduced in games.”

Apparently Gaijin have been working on ships for War Thunder since before the tanks, so it’s probably best to trust they know what they’re talking about by now.

Buy into one of two naval starter packs, which offer a Soviet armoured river boat and US torpedo vessel respectively, and you’ll get guaranteed access to the beta – though there’s potential for invites too.

Fancy a bit of plane-on-tank-on-ship action?