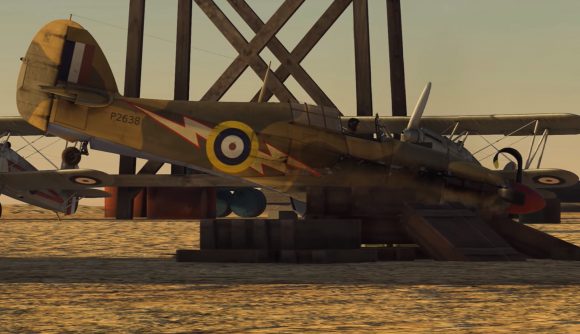 War Thunder developer Gaijin Entertainment has just launched a new documentary called Thunder Stories: Never in a Hurri. It’s narrated by Bruce Grant, whose dulcet tones you may recognize from the game’s Shooting Range. Here, he tells the story of his own father, Douglas Ross Grant, who served as a pilot officer in the RAF to keep Hurricane fighters in the air during WW2.

From the station in Egypt, Hurricanes weren’t in much danger of being shot at, and problems tended to come down to pilot error – but if something went wrong, it could still be deadly. Fuel reserves were located right behind the instrument panel, so if a fire started, it would eat right through the panel and immediately put the pilot in danger before they could escape.

With resources from the British government in short supply – especially in Egypt – a single missing part could mean that an aircraft would be junked entirely. Rather than do that, Douglas Grant reworked a propeller from another another aircraft and spliced it into the existing, broken propeller.

You can hear these stories and many more in the video below.

Grant’s warm voice and a bit of gameplay footage help to sell the stories, and it’s a lovely bit of remembrance for those who served in WW2.