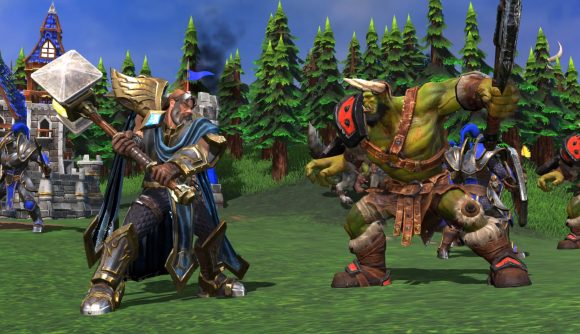 Pre-purchasing Warcraft III: Reforged is supposed to get you access to the original Warcraft III: Reign of Chaos and its classic expansion, The Frozen Throne. There’s currently a hitch with that, which means there’s currently no way to get access to the original games. However, Blizzard say a solution should be rolled out on December 1 alongside the game’s 1.30.2 patch.

Warcraft 3: Reforged will rework the 2002 original with new visuals and other changes, and will also include access to the old version of the game. If you’re hoping to get your nostalgia fix ahead of Reforged’s release, though, you’re currently out of luck. The only Warcraft 3 item you can get on Battle.net right now is Reforged, and there’s currently no way get access to the original.

That’s according to Pete Stilwell of Blizzard’s Classic games team, who announced Warcraft III: Reforged at BlizzCon a couple of weeks ago. On the forums, Stilwell also clarified that the classic games will not come in the form of keys – even if you already own copies – because they’ll unlock on Battle.net, which is now keyless.

Pre-orders get you both classic and Reforged for $29.99 (£24.99), which seems a reasonable price. But what if you just want the classic games and don’t fancy purchasing, much less pre-ordering, Reforged? Answering a fan who asked “are you selling classic RoC/TFT?” Stilwell says: “yes and no. There will be only one client that plays both versions of the game – as with StarCraft: Remastered – so you get classic with Reforged.”

With classic attached to Reforged as a pre-order bonus for now, it’s not obvious whether there will be a way to buy it after Reforged launches, or independently of Reforged. It doesn’t sound terribly likely, but things should be clearer once the current snag has been sorted out. Multiplayer will be backwards compatible in the new release, so it makes sense to keep the old versions in circulation.

These questions were first raised by a Blizzard support message suggesting that access to the originals will be a pre-order bonus for Reforged players. If you already own OG Warcraft 3 via Battle.net, you’ll still have access to it there – this problem is specific to new purchasers.