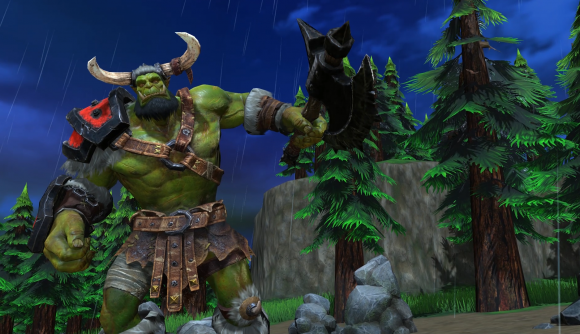 From the moment Warcraft III: Reforged was announced at Blizzcon 2018’s opening ceremony, it was obvious that this was a remaster on a higher scale than many may have expected. More than just a 4K upscaling of old, blocky assets, Reforged sees all of Warcraft III’s characters and assets recreated. The result is an RTS that looks like a brand new game; an actual remake rather than a remaster. And while that’s not quite true – Reforged still runs on the Warcraft III tech – it certainly is a much bigger project than Blizzard’s last classic recreation, Starcraft Remastered. In fact, it’s “orders of magnitude more work” than that project.

Warcraft III: Reforged has been in the works for years, now. “It’s been ongoing since even before Starcraft Remastered,” reveals Tim Morton of Blizzard’s classic games team. “But it’s hard to pinpoint an exact beginning. It started as an idea, then there was some tinkering, then more people joined to prototype. Now it’s a full-fledged development team.

“By the time it ships it will have been multiple years of development for sure,” he adds. And that’s no surprise, considering the work the project requires.

As such, you can’t necessarily expect Blizzard to pop out a remaster whenever it feels like it, even if much of its back catalogue isn’t necessarily as complicated as Warcraft III. “I think every game has its own special case. I haven’t actually looked at the art or the code but I imagine Lost Vikings would be a lot more simple, but this specific game was a lot more expansive,” Morton says.

The fact that Blizzard is taking remasters seriously, though, gives us a little bit of hope for those Diablo remasters that we’re all keeping our fingers crossed for. Might be a better option for next year’s opening ceremony, eh, Blizzard?