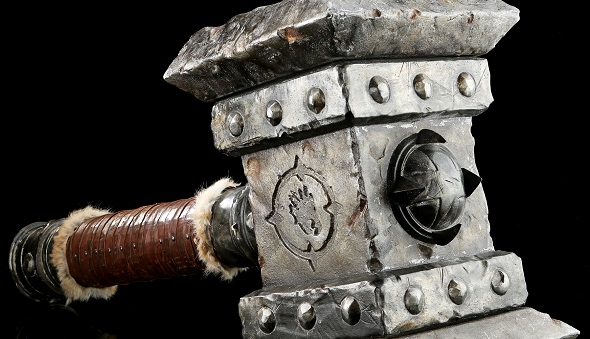 If you’ve ever wanted to get your hands on Orgrim Doomhammer’s Doomhammer, now’s your chance: hundreds of props used in Legendary Pictures’ Warcraft film are currently up for auction, courtesy of Prop Store.

There are more than 500 lots available all told, and they include weapons and armor created by Weta Workshop, the New Zealand-based effects house responsible for weapons seen in The Lord of the Rings and The Hobbit films, among others.

As you might expect, the more recognizable pieces are not going for cheap, but there are some pretty amazing items available. A full set of Alliance foot soldier armor (that includes all associated weapons) has an asking bid of $1,700 USD, while a pair of Draenei Skulls is starting out at $350.

World of Warcraft may be the biggest in terms of popularity, but there are other huge online worlds to explore too. Check out our list of the best MMORPGs on PC.

Some of the items are interesting from a film production standpoint – there’s a full-size orc replica that was used to help compose lighting, but which might also look nice in your living room. There are several pieces that were used for creating visual effects, such as Blackhand’s mocap suit and hammer used by Clancy Brown during production.

If you’re into expensive, elaborate videogames in-jokes, you can even bid on a full set of horse armor.

Prop House say each item was used in the production of Duncan Jones’ Warcraft, and they all come with certificates of authenticity.

If you’re interested, you can head over to the auction site on Prop House to check out the full auction catalogue. Bidding is open now and will run through Friday, May 25th.