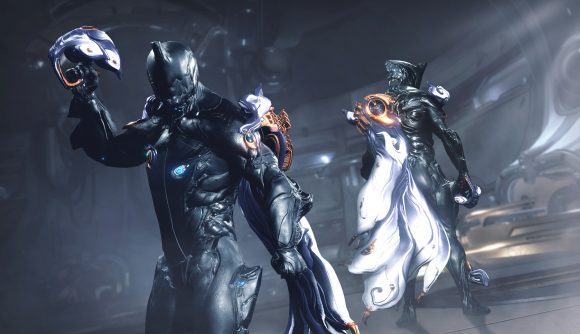 December 12, 2019 An earlier version of this story referred to Warframe cross-play – a representative got in touch to say the developers misheard the question as referring to cross-save. Cross-play is on the radar, but the devs are focused on cross-save.

Warframe is available across every major platform, but it hasn’t hopped on the cross-play train in the way that other multi-platform hits have – heck, Minecraft just closed the platform circle earlier this week. The developers at Digital Extremes want to at least make cross-save a reality, and it seems that this is the next big project after the Warframe Empyrean release date.

Cross-save is a top priority after Empyrean releases, as Digital Extremes’ Rebecca Ford says during a media Q&A. “If it’s not Railjack we’re working on, it’s definitely going to be [cross-save]. I wish we had it right now.” That’s definitely not a concrete roadmap toward cross-save, but it does suggest the devs are prioritising the feature.

Warframe offers some limited options to transfer characters between platforms, but that’s a long step away from cross-save. The possibilities of the feature are further limited by the fact that PC updates come much faster than their console counterparts. But with Warframe’s focus on PvE, if cross-save ever comes to cross-play we at least don’t have to worry about the competitive advantages of mouse and keyboard over controllers.

You can expect to something significant from Warframe among The Game Awards announcements this week, though we don’t know what the nature of that news will be. (Here’s hoping we’ll finally know exactly when Empyrean launches.) Regardless, the official site notes that you’ll be able to get a Glaxion Vandal drop for watching the show on Twitch.