There’s an endearing, simple quality to playing Warframe that masks all the game’s complexities. You live out a power fantasy of being a ninja set upon the stars, zipping and wallrunning down tightly packed space stations as you chop down enemies hunting for the means to upgrade your gear. Between the bouts of pillaging, you’re also free to indulge in some spearfishing or bust out some tricks on your hoverboard.

It’s a sense of imagination that’s enough to make Warframe sound like it comes from the mind of a child. Stitching it all together, however, takes a deft hand. Initially, Warframe struggled to get off the ground as its free-to-play model with purchasable power items blighted the game’s early years. Once the spaceship steadied, however, newer expansions like Plains of Eidolon and Fortuna added open-world areas to expand the game’s horizon.

On a surface level, Digital Extremes’ next update, Empyrean, evokes the feeling of being a space pirate. You rally a crew to your Railjack and commandeer ships, looting and plundering as you go. Dig deeper though, and the real aim is to connect Warframe’s various expansions, rather than add another to the pile.

“Everything else we’ve done to this point has been expansion, and now it’s time to glue it all together,” Digital Extremes COO Sheldon Carter tells us. “We have a game that plays best with these four-player squads, and even though we’ve done things with raids that have had eight player groups, it’s missing that kind of interconnection that we’ve wanted for so long.”

One of the ways Carter is hoping to connect different squads of Tenno is through a new Squad Link system. The premise is simple: if you’re playing a multiplayer activity and would like to call for help, you can place a beacon, and anyone who answers the call gets a task to do. During the demo at TennoCon, one team engages in a starship battle with a foe before sending out a distress beacon. The team who answers on a faraway planet is then given a shield reactor to blow up, creating a moon of Endor moment from Star Wars.

“I think it’s also a whole new way of playing the game; you’re going to play, basically, a space shooter with your teammates,” Carter says. “You got squad members grabbing cannons and dealing with boarding parties, and we got this crazy Archwing gun were you get to shoot yourself or your friend in their Archwing through ships, and you have Captain Marvel moments all over the place.” 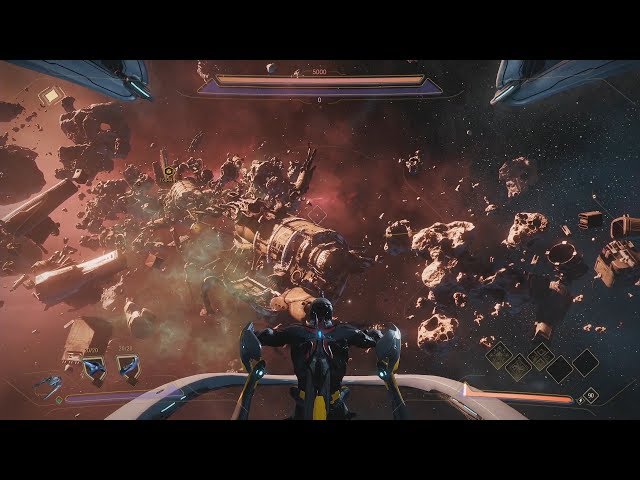 Of course, this isn’t the first time we’ve seen Empyrean – Digital Extremes showed off a demo last year under the name Project Railjack. A year on, Carter says the main differences between the demos was that the first shows off an idea while the second is an education on all the systems at play, and how they tie Warframe’s universe together.

“‘Decapitating a galleon’ is one of my favourite lines that the guys wrote for this one, as that’s what we end up doing in this demo,” Carter explains. “We end up with the feel of Star Wars. You got your team down on the planet, and they’re killing and rocking it. Their actions impact our group up in our ship.”

Over the past year Digital Extremes has been clear that Empyrean isn’t a space sim like Elite Dangerous, but, instead, is more comparable to ’80s and 90’s cartoons like Battle of the Planets. As such, we ask Carter if that influence remains the same a year on.

“My favourite parts in the demo, or when I’m playing Empyrean myself, is when it feels like I’m playing Robotech,” he affirms. “Where I can see that the laws of physics aren’t exact, you know? You see volleys of missiles, it’s feeling more like you’re a hunter sub rather than a slow, plodding ship. The space opera vibe that comes from Empyrean is one of my favourite parts of it.” 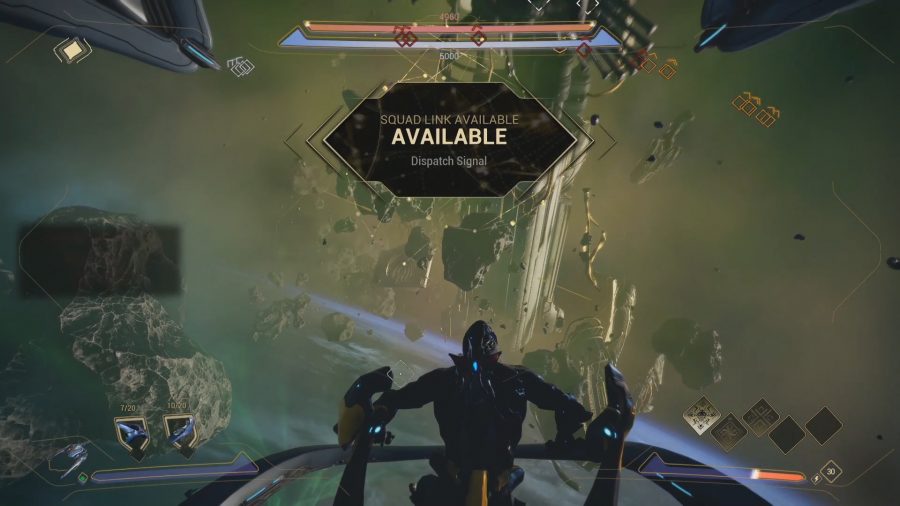 As to what it is about old animations that inspires him, Carter goes on to explain that the ways Robotech gives its viewers a sense of the enemies’ personality are a huge draw for the team, even if it means abandoning realism to do so.

Every time we put somebody in the side gunner, they get sick and throw up

“It’s funny because every time I look at a Grineer Galleon, I can’t help but think of a Zentraedi armada ship coming towards me,” Carter explains. “The art team killed it, and they have the same silhouette as those things. And so, when you feel like you’re hunting between rocks for them – like the fighters are blowing by you, but you can hear their chatter – it doesn’t necessarily make sense, but it’s just cool because it’s giving you a flavour of the enemy having a personality that you can understand. That’s something that Robotech also did well; giving you the vibe of the opposing force.”

While the Empyrean demo was delivered in fine form, polishing it to this point was far from easy. Carter explains that getting the team to buy into the idea that they’re taking Warframe’s tried-and-trusted sci-fi fantasy further into space was a difficult sell. He also tells us that it threw up a lot of design challenges. One particular instance left the development team feeling physically sick.

“The [Railjack’s] side gunner is one of those things that seems like it would be a simple solution, but every time we put somebody in the side gunner, they get sick and throw up,” Carter continues. “So we had to work out the gyroscopes so that person always had a target, and could always feel like they were on an even plain even though the pilot could be doing crazy stuff.”

While Digital Extremes had to plough away to make sure their idea could work, Carter says the team also wanted to make sure they were innovating on their previous work, too. “I think it would have been really easy just to be like ‘every weapon on the Railjack has a mod system’ just like everything you’ve ever done in Warframe,” he recalls. “What we wanted to do is go back and look at that differently. How could we make it more like the systems of the Railjack play as if you’re playing FTL, but an action FTL.”

Empyrean’s ambition seems only to be matched by Digital Extremes’ content release schedule itself, with a new narrative quest called The New War on the horizon alongside another open-world expansion called The Duviri Paradox. For Carter, however, release dates are fluid, which means that Digital Extremes won’t succumb to crunch to meet them.

If we have a sprint mentality, we're not going to have a development team

“It’s crazy, but the only hard date we have in a year is TennoCon,” Carter explains. “It’s the only thing that we can’t move. Everything else we feel like we have control over it, so we can work as hard or as easy as we need to meet the goals. I mean, we have a great relationship with our community, and our community tells us when they’re hungry – ‘hey, it’s time to feed us guys, when are you going to give us something?’ So, we take that type of pressure seriously, and we try to meet it. But, also, a game like Warframe; we’re on seven years, it’s a marathon, not a sprint. And for the development team, if we have a sprint mentality, we’re not going to have a development team.”

Tenno of ten: Everything we know about Warframe Duviri Paradox

When asked about the importance of having an open-discussion within the industry regarding crunch and healthy working practises, Carter is equally positive. “I think it’s great. I think it’s a hard part of the game industry, and I think every industry is trying to cope with the fact that people should value your time. Time is everything.”