Earlier this year, Warframe developer Digital Extremes announced the action-RPG game’s engine was in for some graphical upgrades, with a new option for ‘deferred rendering’. Now, the studio’s taken that one giant leap further with the announcement of an “Enhanced Graphics Engine” for Warframe, which will usher in a “complete redesign” and snazzy new visuals to drool over.

“We’re moving into ‘Next Gen’ by phasing out our old rendering engine!” the developer announces on the free PC game’s forums. “The launcher option has been moved into the ‘options’ screen as we want to get more Tenno onboard for testing it!” The Enhanced engine – which was referred to as ‘Deferred’ before – is “a complete redesign to achieve more accurate reflections and give us the ability to utilise dynamic lighting and shadowing across the entire game”.

The main place you’ll see these dazzling new upgrades is in Warframe’s landscapes, the studio explains, offering some before-and-after previews of the changes in effect. You can eyeball these further down this story. Otherwise, the differences frame-by-frame “will be subtle”, the forum post explains.

The Enhanced Engine will make certain precomputed reflections in some of the game’s “very shiny” surfaces “less distorted”, and “the reflective glints on your Warframe won’t ‘pop’ each time you move between tiles”.

You'll want to watch this one a few times! 👀

Preview improved lighting, shadows and reflections with the Enhanced Graphics Engine on PC. (Pro tip: head to an open-world landscape to see all of the incredible details!) https://t.co/MdKZHcOLyX pic.twitter.com/lJOrqjqumA

In terms of dynamic lighting, the studio says that, since Warframe’s launch back in 2013, “the number of dynamic lights we’ve typically used per-frame has been kept in the low single digits. Your gun, maybe a flashlight, maybe an ability cast… everything else was precomputed, stored in textures (light maps) and point clouds (light probes), or faked with ‘glow sprites'”.

The reason behind this ties into the game’s legacy engine needing to re-render everything a dynamic light touched all over again every time one was added to the frame. So, as the studio says, “in the outdoor landscapes it was a faceplant – one muzzle flash light = draw the whole valley again! Not only smashing your GPU but also choking the CPU with additional work”. 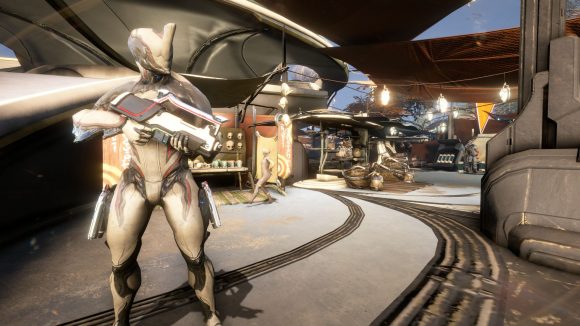 “Cetus before” (via Digital Extremes)

But, the all-new Enhanced engine “excels” in changing how this works. It “renders out the attributes of the scene (colours, glossiness, shape) to offscreen buffers”, and changes the way what light sources “see”, as well as lighting and reflection probes, are processed, meaning that “proper dynamic lighting costs hardly more than those terrible glow sprites we’ve used in the past”. The changes also mean “costs grow linearly, proportional to their size on screen, without incurring huge CPU and GPU penalties to ‘draw the whole world, again and again'”. Lovely. 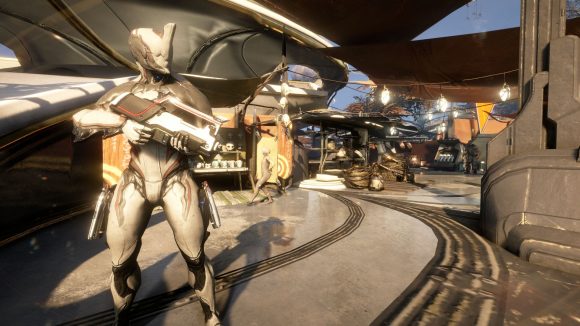 “Cetus after” (via Digital Extremes)

It’s worth noting this is still in an experimental phase, of sorts. Digital Extremes says that, until it’s totally phased out the legacy version of the system across the various different platforms, you won’t see all-new dynamic lighting everywhere. But, “there is one place you can go to see the dramatic lift it brings: landscapes! There in the Vallis, the Plains, and the Drift those fuzzy, ambiguous shadow blobs are replaced with dramatically real-time sun shadows! Subtle in many tiles, but not so here!”

Head to the full forum post here to find out more about how these changes work, and what to expect from Warframe’s all-new visuals.