By the time Warframe Fortuna releases early next month it will have been a full year since Digital Extremes blew the collective minds of their player base by releasing the open-world Plains of Eidolon expansion. After four years of bullet-jumping through tight corridors in labyrinthine levels, the Warframe community was finally able to spread their Archwings and fly. But while the awesome scale of of Plains of Eidolon was freeing, it quickly became apparent that there, err, wasn’t actually a lot to do there.

Step forward Fortuna, Digital Extremes’ second open-world expansion. Fortuna is set on the frozen surface of a terraformed Venus, called the Orb Vallis, and – like Plains of Eidolon – features a hub district with vendors, factions to earn standing with, and terrifying bosses. You’ll still be able to fish, too. But a recent hands-off demo shows that Fortuna is shaping up to be a drastic improvement on its predecessor, adding to its solid foundations with several new features, and a map that’s designed to distract players at every turn with strange artifacts, strongholds full of enemies, and wildlife.

The biggest change is the K-Drive, a new hoverboard vehicle that players can spawn in at any time while exploring. Unlike the Archwing, which offers such rapid movement that it made the plains feel small, the K-Drive focuses on making getting from A to B look and feel as good as possible. You can perform tricks in the air, grind on rails, and even knock enemies down by landing on them, all the while earning standing with a local faction of children called the Vent Kids. This group of hoverboarding hooligans will reward you for winning races and performing stunts across the Orb Vallis by granting new cosmetics and mods for your K-Drive. This, in turn, encourages even more exploration.

You’ll also come across networks of caves harbouring special enemies, loot, and types of fish that can only be found in specific biomes. Above ground, you may come across piles of dung that lead you to native wildlife, which you can then tranquilize and capture in the name of conservation. These features ensure that you’re never short of things to do when you leave the main roads and built-up areas of the Orb Vallis, while several quality of life improvements – such as being able to receive and turn in bounties without having to return to the Fortuna hub – mean you can immerse yourself in your new surroundings without breaking the core gameplay loop. 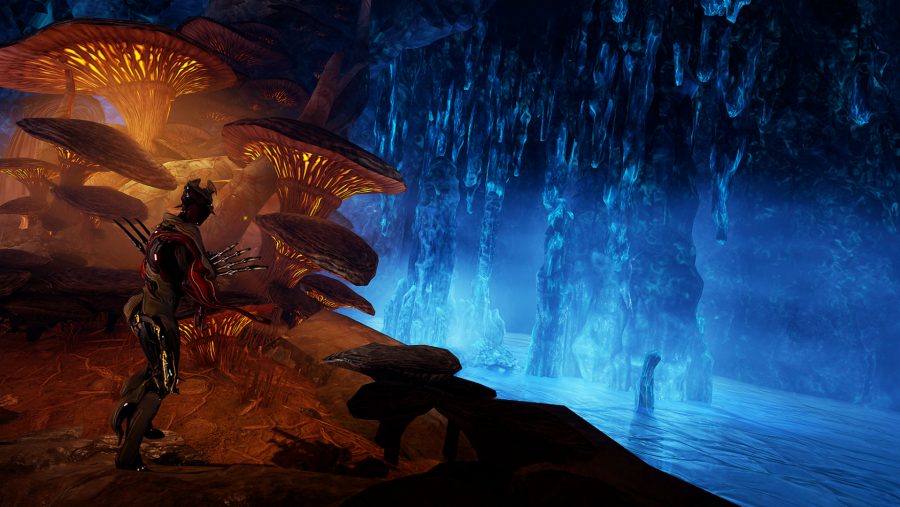 All of this promises to make Fortuna feel like a more fully realised open world than the Plains of Eidolon expansion, which should be music to the ears of Warframe veterans. Unfortunately, however, it looks like new players will still have an exceptionally hard time finding their feet. Live ops and community director Rebecca Ford confirms during the demo that there won’t be significant tutorials for any of the new systems, and little more than an intro cinematic to introduce players to their new stomping ground. This won’t bother the millions of players already familiar with Warframe, of course, but it’s a shame that such an exciting event in Warframe’s calendar will still prove challenging for new players to get to grips with.

Onboarding concerns aside, however, Fortuna represents the most confident open-world Warframe experience yet. It should provide dedicated players with another hundred or so hours of beloved grind in this unique, rather special MMO.