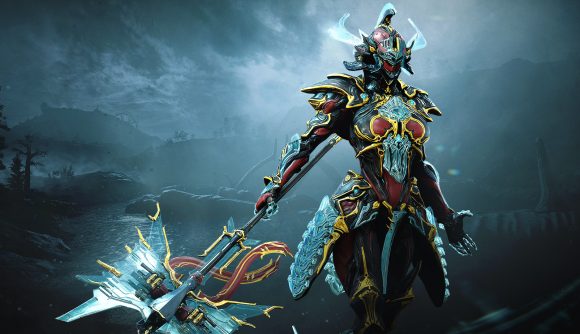 If you’ve been eyeing the spectacular Gara Prime in Warframe this summer, now is the time to pick up the space ninja game’s powered-up manipulator of glass. She’ll be moved out of Prime Access September 8, along with the Prime forms of her distinctive weapons, Astilla Prime and Volnus Prime.

Gara Prime has increased health and armour values over the vanilla Gara variant, plus an extra polarity slot for additional mods. Astilla Prime, her trademark shotgun, fires slugs to go along with Gara’s volleys of explosive glass shells, and she can dish out criticals and knockback with her glass sword. The Prime version of Gara has a special passive that causes an energy pulse whenever she comes into contact with an Orokin Void Death Orb, which gives a 250 energy boost to all nearby allies.

Along with Gara Prime heading out of Prime Access, several prime warframes are heading into the vault September 8. These include Atlas Prime, Tekko Prime, and Dethcube Prime – which means you’ll have until then to collect their relics or purchase the ones you’ve been meaning to add to your Warframe collection.

Here’s the announcement, with a link to the Warframe store page.

Shatterproof your Arsenal before it’s too late, Tenno!

Digital Extremes will be revealing the next Prime warframe during a livestream on Twitch August 27. That’s set to start at 11 a.m. PDT / 2 p.m. EDT / 7 p.m. BST. It’ll be the first in-game look at the upcoming Nidus Prime, based on Warframe’s pestilential mutant who can regenerate health while spewing toxins.