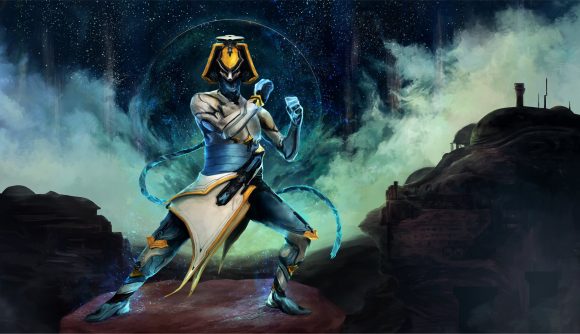 During its Friday devstream, Digital Extremes unveiled the next Warframe coming to the game: Baruuk, who the team described as a “reluctant warrior” who is styled on nomadic African tribes’ traditional clothing.

In terms of design, Digital Extremes said the motivating factor for Baruuk was making a warframe that’s “kind of the opposite of all the other warframes.” Baruuk’s abilities are focused on mitigating or reflecting damage rather than straight damage output, but he can “only be pushed so far.”

The idea was to create a character a bit like A History of Violence’s Tom Stall or Keanu Reeves’ eponymous character from the John Wick films – a lethal and effective warrior, but one reluctant to venture back into the fray guns blazing.

Baruuk’s armor is an asymmetrical cloth design, and game director Steve Sinclair said the look is inspired heavily by Sudanese tribespeople, and other nomadic African groups. There’s also a heavy flavor of Tibetan and Nepalese monks in the design, which fits thematically with Baruuk’s preference to redirect violence around him or back at his opponents.

Digital Extremes didn’t reveal much about Baruuk’s specific abilities, other than that they’ll be themed as defensive or reflective.

Here’s the full stream if you’d like to watch yourself. The Baruuk reveal begins at about the 16:40 mark.


Warframe’s latest expansion, Fortuna, launched November 8, and following its release the game saw its highest-ever concurrent player count in the five years since it first came out. The new content includes the massive Orb Vallis open world area on Venus, which you can zoom around on hoverboards called K-drives.

Digital Extremes doesn’t typically provide firm release dates for content updates, so we’ll have to wait and see when Baruuk shows up in the game – the team has yet to finish rigging and animating the model, but the team says to expect him “by the end of the year.”