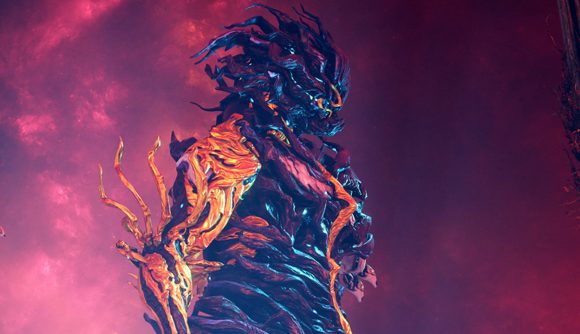 This weekend’s TennoCon 2021 brought with it a load of fantastic announcements for Warframe, most notably the full unveiling of The New War expansion coming later this year. Beyond that, the most exciting announcements were the reveal of the next two warframes coming to the online title in 2021: Nidus Prime and Caliban.

If you weren’t aware, developer Digital Extremes started adding Prime variants of classic warframes – which are most powerful versions that usually get released once a year. Nidus Prime will be the next warframe to get added this year, which, as its name suggests, is the tougher variant of the parasitic Nidus. While Nidus Prime doesn’t have a specific release date yet the ‘frame will arrive as part of the next Prime Access later this Summer.

Digital Extremes describes Nidus Prime as “the Orokin’s original vision for the notoriously unkillable Nidus” and will sport “signature Weapons, Customizations, and much more”. That’s pretty much all the developer has revealed about Nidus so far, although as Nidus is the only warframe to innately regenerate health their Prime version should be one tough customer.

Presumably when Nidus Prime drops in their Warframe Prime Access, like other warframes of this type it will only appear in the game as a set of blueprints – which players can then put together in the Foundry. Nidus Prime is an exciting addition, but perhaps not as much as a brand new warframe like Caliban.

Command the Infestation as the undying #Warframe.

Caliban will be the next proper new warframe added after this month’s Yareli, and is part Sentient. The team describes them as “wholly destructive.” The only skill they’ve revealed for Caliban is a Passive ability to resist Damage types as they take hits, which includes Caliban’s squadmates too. They will be the 48th warframe to be released, and is coming out alongside The New War expansion later this year.

The New War is Warframe’s first next-gen expansion and will bring with a lot of graphical improvements and full cross-save and crossplay capability. That also includes the upcoming mobile version of Warframe, which was also revealed at TennoCon 2021.