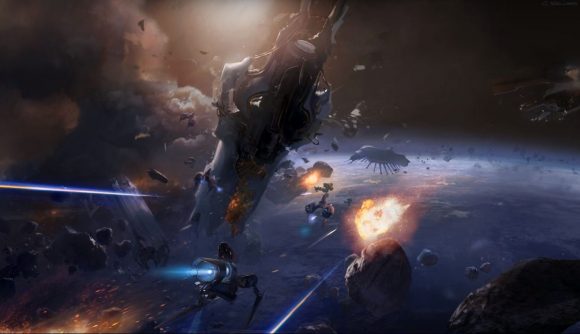 Warframe players are eagerly anticipating the arrival of Railjack, an update that will add huge customizable warships to Warframe’s ecosystem. While developer Digital Extremes hasn’t divulged exactly when Railjack will arrive, it has given us a peek at what the ship customization interface is going to look like, and it’s very pretty.

Mods are the name of the game in Warframe – not the kind download to alter the game, mind you, but the ones you slot in to various systems within the game to add bonuses or additional powers. Railjack’s warships will have their own mods, and you’ll select the ones you want and arrange them on a screen something like the one shown below.

The menu is a nice piece of visual design – a kind of nouveau-Victorian look with delicate lines done in a light-on-dark scheme. Your ship is represented slightly off-center, with the rest of the screen divided into rough quadrants for various mod types. Those include tactical, systems, weaponry, and battle mods.

Around the diagram of the warship itself you find indicators for shield status (it appears you’ll be able to allocate shields forward, astern, and to the sides); an area to show how power is being allocated between weapons, flight, and shields; and a cluster of bars to give you an at-a-glance look at the status of your hull, power, and life support systems.

"Tenno, your presence is needed on the bridge."

In this work-in-progress mock-up, you can see an icon that indicates a damaged reactor superimposed over the ship diagram, so presumably you’ll know when something needs fixing, or when you’ve got a shipboard fire to put out.

Digital Extremes generally doesn’t announce release dates for Warframe updates before they’re just about ready to go live, but rumor has it Railjack is on course to arrive this year, sometime after the annual TennoCon fan festival in July.