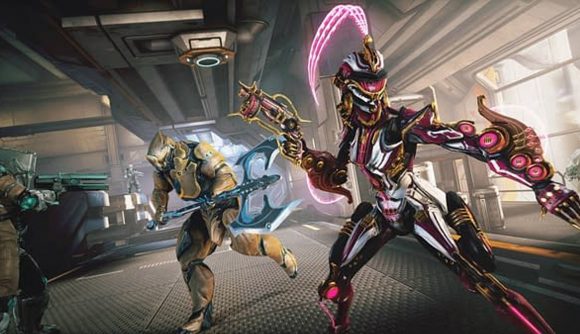 For the second year running, TennoCon, the event that celebrates all things Warframe, is going all digital. Fret not, however, as the flow of updates continues, with two coming this spring to the ninja game.

In the latest devstream, developer Digital Extremes teased what’s coming in a pair of updates due to arrive sometime in spring. The first is Railjack 3.0, promising goodies for Corpus Railjack, and the Command intrinsic, coming to PC first for now. The second is Call of the Tempestarii, previously teased as “so metal, it’s out of control”, bringing a new Warframe Sevagoth, a new Warframe Quest, and Zephyr Deluxe, and that’ll arrive on all platforms when it rolls out.

Getting the difficult announcement out of the way, TennoCon 2021 is, once again, taking place entirely on livestream. Digital Extremes is using a work-from-home setup until September this year, and since TennoCon usually takes place in July, that means the conference is remaining all digital. TennoCon 2020 migrated to a digital setup as people around the world were stuck at home due to the ongoing pandemic. Unfortunately, that situation hasn’t meaningfully changed to allow large gatherings yet, meaning another year of E3-esque streams and online conferences.

Going a little more in-depth during the video, it’s explained that Intrinsic ranks are being rebalanced in the upcoming updates. The interior of Railjask is getting renovated, and new game modes are coming, as well as some returning.

Weapons are getting tweaked, too, to match melee. “We are aware of the current melee meta and are exploring changes to bring our primary and secondary weapons closer in power to Melee,” the devstream post says. “Overall, the goal is not to nerf melee — we have aspects of it we want to tweak, but the majority of our focus is on bringing guns up to its power level!”

You can watch the full video here:

If you’ve Prime Access, you recently got Octavia in Warframe as part of your subscription.