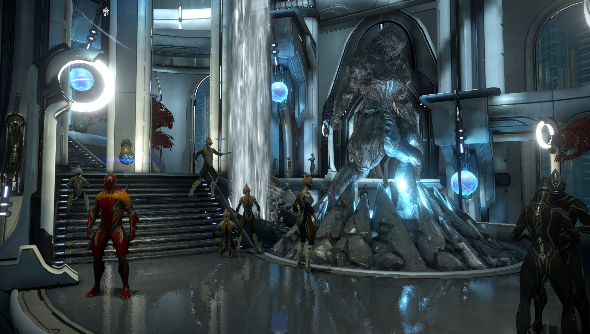 Warframe has picked up a sizable new update that adds Orbital Relays to its solar system. These act as social hubs for numerous players, adding a much more MMO-like element to the co-op game.

If you’ve played Destiny on the consoles, then Orbital Relays may feel familiar; they share a lot in common with the Tower. In more general MMO speak, they’re cities. Travelling to one not only allows you to wander the halls chatting and bumping into other players, but the Relays are also home to traders and Enclave members.

At each Relay will be Void Traders, who will buy your unwanted items and sell rare loot, Darvo’s Market for all your day-to-day essentials, the Syndicate Enclaves where you can deal with Syndicate missions and hand in medallions, and Mission Control: an area where you can change your loadouts and view the galaxy.

Access to the Relays is available right now, and comes as a free update to the already free-to-play game.