When Fortuna comes out later this year, it’ll add a massive open-world zone to the world of Warframe. It’s the Orb Vallis, a snowy region of Venus full of towering stone arches and ancient Orokin terraforming structures. Digital Extremes has now revealed the map of the Orb Vallis, so you can start plotting hoverboard courses as you wait for Fortuna.

The developers revealed the map during one of their weekly devstreams on Twitch.

In the map, which you can see below, you can spot artificial structures highlighted in green. These will mostly be entrances to Corpus bases, which we’ve learned in a past developer stream will be large, sprawling underground structures that you’ll be able to seamlessly enter and plunder at will.

The map also shows several of the large, delicate crystalline or rock formations that tower over the surrounding geography, creating huge gaps to leap across on the Bondi K-drive, the customizable hoverboard that players will be able to use when Fortuna arrives.

Down in the lower right corner of the map, a huge structure can be seen. It’s bigger than anything else on the map, and the visible portion is arranged a bit like the spokes on a wagon wheel, and it seems to be angled into a large, snow-covered dome. 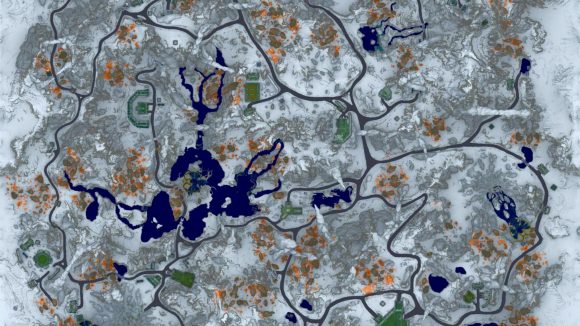 Digital Extremes says in a blog post that the entrance to Fortuna’s neon-lit underground city, which will work as a trading and crafting hub, is close to the center of the map.

There’s no set release date for the Fortuna expansion, but Digital Extremes says they’re planning on launching it sometime this fall. Then it’ll be time to hit the slopes.