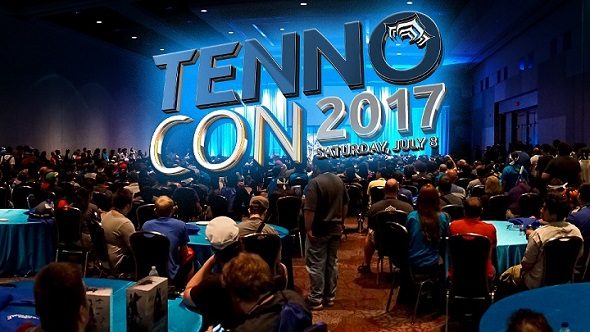 Building off the success of last year’s sold out event, Digital Extremes have announced that the Warframe fan convention, Tennocon, will be returning in 2017. Taking place on Saturday July 7 at the London Convention Center in Ontario, the convention will bring together Warframe fans from all over the world for meetups, competitions and special panels about the future of the game.

Tickets are now available on the Warframe website, with there also being a special digital pass available for those who can’t make it out to Canada, but want to get the exclusive Tennocon swag and support the event. A cut of the ticket sales will be going to an as yet unannounced charity and Digital Extremes hope it can improve on last year’s $75,000 charity donation.

While now unfortunately sold out, the $250 VIP Ticket for Tennocon gave players a special Collector’s statue of one of four Frames, as well as a special studio tour of the Digital Extremes offices. There were even two special $1,000 Legendary Tickets, where a pair of dedicated fans would get all the rewards from previous ticket sales, along with their own custom in-game Glyph and the opportunity to record some voice lines to feature in a future Warframe update.

For those who aren’t attending, all the panels and developer discussions will be streamed live on Warframe’s Twitch channel. This includes the main Tennolive presentation, where Digital Extremes will reveal new content and developments coming to Warframe in the rest of 2017. If you are a Warframe fan, you will not want to miss any of the festivities.

Details on the Digital Pass, as well as an event schedule and the exclusive in-game Tennocon merch will be posted on the convention’s official site, so periodically check in for more details.