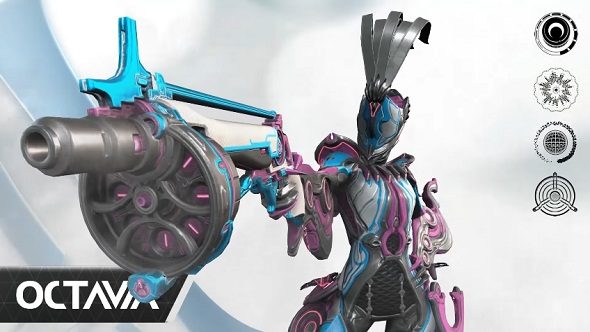 Marking the game’s four year anniversary, Digital Extremes have released their latest content update for free to play action game Warframe. Titled Octavia’s Anthem, this update adds the magical maestro Octavia as a playable Warframe, who can destroy enemies with the power of music.

If you’re on a budget, check out our list of the best free games on PC.

Octavia’s power comes the Mandachord, a fully programmable electronic instrument which controls her abilities in battle. Divided into percussion, melody and bass, players construct special songs which actually affect Octavia’s combat capabilities. With her Mallet ability, you dispatch enemies with a killer drum solo, as a ball of energy sends out blasts based on your Mandachord’s percussive track. Resonator allows Octavia to literally drop the bass on foes, sending out a rolling ball which attracts nearby enemies and makes them do the conga after this moving projectile. The Resonator can then pick up a Mallet, creating a moving wall of death.

As for support skills, Metronome can gives allies one of four different buffs, depending on certain actions performed to the beat of Octavia’s song. Jumping along with the melody will gradually increase you speed, crouching to the beat will make you invisible, shooting in the right time signature will give you multiple shots while melee attacking to the melody will increase your damage. Her final ability Amp is dependent on how loud the surrounding area is, with more noise increasing the damage buff to surrounding friendlies. Any Mallets within Amp’s radius also have their range doubled.

Players must complete the lengthy Octavia’s Anthem quest to unlock this death dealing DJ, but it’s more than worth it just to get access to the Mandachord. The Warframe community has already embraced the potential for memes with the instrument, as seen in the Twitter video below. You can trade Mandachord songs with other players, so expect to hear plenty of Mandachord remixes and covers floating about while questing.

Somebody had to do it. It might as well have been me. pic.twitter.com/K3TdR6arWe

To round off the fourth anniversary celebrations, Digital Extremes are offering a free Dex Nouchali Syandana to all Warframe players. It will appear in your Landing Craft Inbox on March 28, with the previous anniversary gifts available for unlocking by completing select Alerts over this weekend.