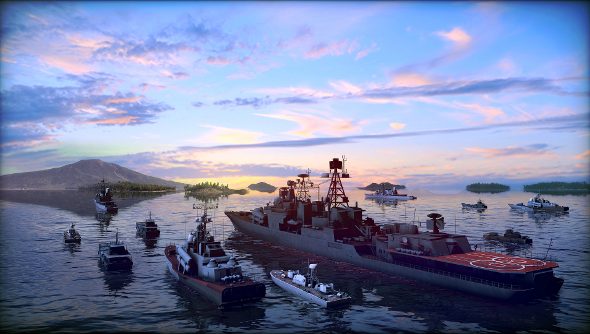 The Wargame RTS titles are serious, detailed games that throw a mind-bogglingly vast array of modern military units at players and task them with duking it out – with AI or devious human minds – in striking battles stretched across often massive maps.

They don’t really have any direct, obvious competition. With Wargame: Red Dragon, the third in the series, Eugen Systems finds itself in the peculiar position of competing against itself. Wargame: AirLand Battle remains an excellent game, and while Red Dragon expands upon it with naval units and new campaigns, it also stumbles in places and strips out some important features.

Yet the battles are just as intense, the multiplayer as exhilarating and stressful and it continues to offer tactical complexity and depth that its peers simply don’t. It would have been a great expansion, but struggles to be a great sequel.

Red Dragon shifts the wars away from Europe and over to East Asia, where European, American and Russian forces fight with and against South and North Korea, Japan and China. The new factions bring with them a bounty of military hardware. 450 units. That’s new units. 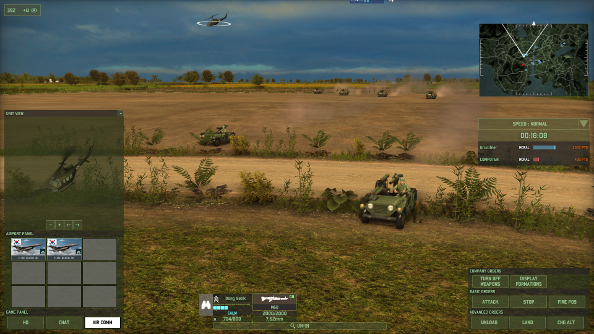 With the overwhelming number of units and factions, learning the ins and outs of each unit takes a painfully long time. Initially it’s simpler to choose units based on their role, be it anti-aircraft support, stalwart tanks to break through enemy lines, recon units to keep track of enemy movements, and get used to the basics before experimenting with the many different units that fulfill those roles.

There are overlaps, but also plenty of distinct vehicles and squads of soldiers all with specific ranges, multiple weapons, finite ammo, speed and all manner of statistics that can set them apart.

The various campaigns, split up into different tiers of difficulty, thrust factions upon players, offering an opportunity to get acquainted with the new units before taking them into the highly competitive multiplayer battles.

Red Dragon’s campaigns are fine. The alternate history they propose – between the ‘70s and ‘90s – offers diverse confrontations from the easiest South Korea vs. North Korea squabble to Communist vs. Communist conflicts. The narrative is threadbare and filled with bland talking heads. The real stories are found in the battles, where commanders craft their own tales of surviving burning jungles showered in napalm or stealing victory through sneaky airstrikes in the last minute. 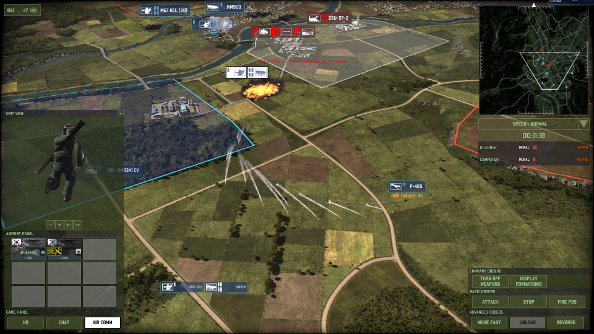 They are worth going through because they represent a chance to get to grips with different factions, but don’t provide the same challenge as the multiplayer conflicts. Enemy AI can be punishing thanks to its savage aggression, but it fails to employ diverse tactics and doesn’t seem set up to deal with the losses between one battle and the next. Yet I still found myself beaten thoroughly on several occasions, as matches can become catastrophes very quickly if you take your eye off the ball for even a second. One well-timed airstrike or long-range missile barrage can utterly devastate an army.

And there’s something rather important missing in the campaigns: there are no co-op campaigns at all. AirLand Battle provided these entertaining diversions, and they were extremely helpful when I was first getting used to the complexity of the series. Having a buddy to back me up was a massive boon. They are also simply fun. Throwing another player into the mix expands the tactical depth and creates a more rewarding experience.

Some of the dynamism of AirLand Battle’s campaigns have also been lost. Gone are the sneaky abilities offered to commanders in the campaign map. These abilities gave greater meaning to the resources used to request additional forces, because they could also be spent on weakening the enemy through sabotage and even more nefarious means. Without these, the campaign map aspect feels a little shallow. 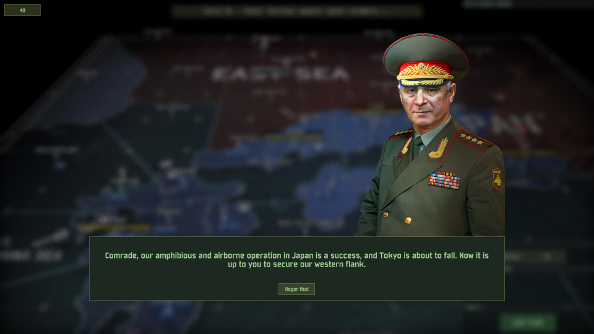 The battles, though, they are still remarkable. Wargame might not have the recognition of some of its RTS peers like Company of Heroes or Starcraft, but for a niche game it’s a stunning one. Realism is the focus, so there isn’t much of an art direction beyond making everything look as believable as possible.

The payoff is obvious during those rare lulls in the middle of a battle, where you can zoom right in and see how Eugen has recreated the Asian landscape in startling detail. Units and the devastation they cause are equally striking. Huge lumbering tanks struggle through the mud, tiny men running around them, sprinting to cover, and aircraft zip around, launching missiles that streak across the sky.

Red Dragon’s terrain isn’t just eye candy, it informs battles. Vehicles can get stuck in mud and in dense forests; soldiers can set up ambushes, hidden by the side of roads; and recon units seek out mountains and hills to get a better view of the battlefield. The strict field of view (there’s no fog of war) means that enemies could be hiding anywhere, and even flat fields can present obstacles for heavy vehicles.

It’s when the action shifts from land to sea that things get a bit shaky. Ostensibly, naval shenanigans are the main draw in Red Dragon, just as the inclusion of aircraft was in AirLand Battle. But this time the addition is not handled as deftly. 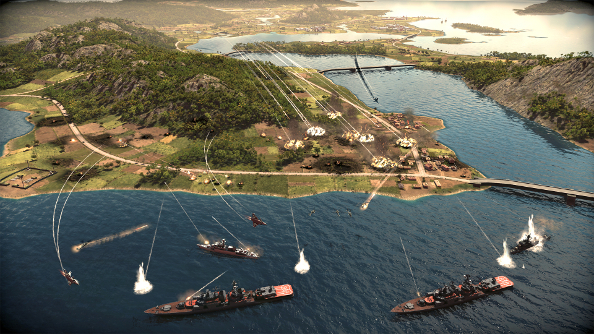 Naval warfare does not have a great history of being implemented in combined arms games like Wargame. While infantry, tanks, jeeps and aircraft can all participate in the same space, ships have to be kept away from the battle, out in the ocean, and struggle to integrate.

In mixed maps with coasts, the addition of ships can aid a commander. Being able to order artillery strikes from the coast – not entirely unlike Shogun 2’s excellent Fall of the Samurai expansion – is empowering, while smaller vessels are able to meander around rivers, surprising troops on the banks. It can make battles feel a bit bloated, demanding the juggling of air, naval and land units all at the same time, but the challenge can be rewarding when a combined assault works perfectly.

In sea maps where the only land is tiny islands, the story is very different. When ships fight other ships, Wargame’s signature realism is thrown out of the porthole. It’s more akin to playing with ships in the bath than actual naval conflict. The vessels get up close and personal when in reality they would be so far away from each other than they’d be hard to see without radar or at the very least binoculars. It’s like watching modern fleets reenacting 18th century naval battles for kicks. 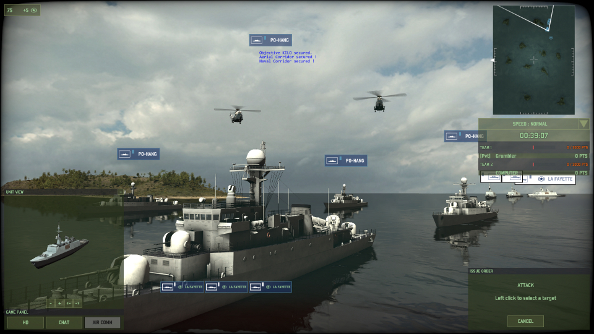 And they lack the diversity seen in the air and land components of the game. Factions share a lot of similar vessels, and this becomes even more apparent in maps where most of the units are ships. The use of jets and helicopters in these conflicts manages to mix things up a bit, but it doesn’t obscure the fact that the sea encounters feel a little half-baked.

Multiplayer returns, and despite the absence of a co-op campaign, it continues to be the strongest aspect of the franchise. From close quarters duels between two armies across quiet, pastoral maps to gargantuan 10 vs. 10 affairs where each players focuses on different roles and different parts of the map, Red Dragon provides a plethora of reasons to fight other humans.

As I did in AirLand Battle, I favour the larger conflicts. These allow for a significant degree of specialisation, rather than the standard combined arms philosophy found in the rest of the game. With nine other players watching your back, you can choose to focus purely on anti-air, backing up your allies by watching the skies and halting airstrikes, or you can assist your chums with your broad selection of slow but powerful tanks, defending the vulnerable units of your allies.

The multiplayer is elevated by the deckbuilding system. Armies are constructed by selecting unit cards from all the different factions, so you can pick and choose based on your favourites rather than being limited to crafting a deck exclusively focused on the units of a single nation. 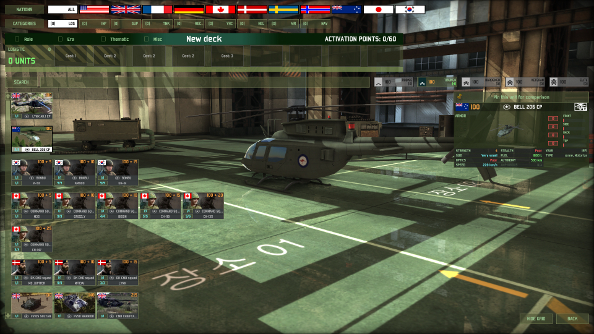 There are benefits to going for focus over diversity, though. Commanders who construct their forces from the units of one faction or specific types of units are rewarded for specialising. Choosing to play as a Norwegian force, for example, confers a massive bonus of a 40 percent increase in unit availability, while specialising in motorised vehicles gives more experience and reduces the cost of acquiring those units.

Unfortunately, and this is an issue that permeates throughout the game, the multiplayer is not in the least bit welcoming to newcomers. Major game concepts are poorly explained, and while one can defeat the AI while ignorant – though even that can be tough given the AI’s aggression and field of view quirks – human opponents are a different matter. There are clearly a lot of people playing who have a hundreds of hours of experience with the series and who have played together frequently, and there’s no way for new players to really deal with that.

Absent a matchmaking system, all that new players can do is keep an eye out for games in the match list that specify beginners, as there’s no other method for matching players with similar skill levels. 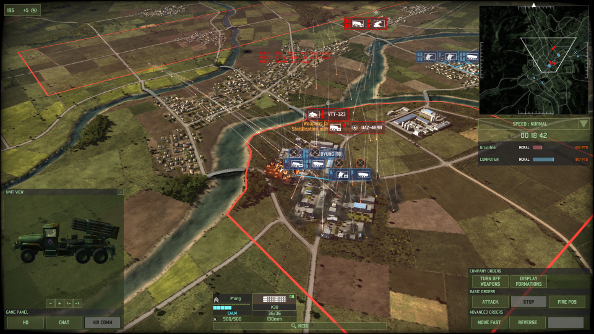 Red Dragon’s excuse for a tutorial is atrocious. For a game with such depth and complexity, brief text explanations and tiny pictures simply don’t cut it. Even the easiest campaign throws players into a tough situation with no explanation. As South Korea, players have to defend their last remaining territories from the North Koreans until the US pops up to help. That “hold out for x turns” type scenario is a bit intense for first-time commanders and at no point does it try to ease players in or explain even the most basic game concepts.

This disregard for new players exacerbates the sense that Red Dragon is really more of an expansion. It’s for Wargame veterans who have devoured AirLand Battle and are ready for more challenges. Yet it’s branded and priced like a full game. It’s not even that it doesn’t have the content to justify that – it’s massive, but most of its scope is borrowed from AirLand Battle. What’s new just doesn’t impress in the same way. The 450 extra units are a welcome addition, but can blend together, and the naval aspect is just not very good besides providing support in coastal scraps.

Wargame: Red Dragon is more of the same excellent, very serious strategy that experienced players have come to expect. If you’ve exhausted AirLand Battle and still want more, it would be silly to ignore Red Dragon. But if you’re looking for an entry point into the series, then this is not it. Pick up AirLand Battle instead. It’s still one of the best modern RTS titles you could have the good fortune to play.