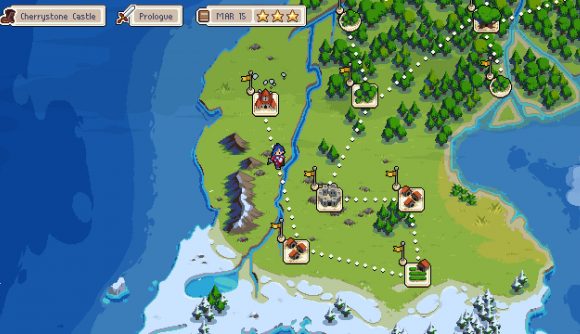 Wargroove, Chucklefish’s answer to the 3DS classic Advance Wars, will support cross-platform play between PC, Nintendo Switch, and Xbox One when it launches February 1. The developers confirmed cross-platform support would be included at launch in a tweet this week.

“Sometimes your friends aren’t in the same faction as you, and that’s okay,” they riffed. Naturally, this means you’ll be able to play Wargroove online in head-to-head battles, but Chucklefish is also supporting online co-op and asynchronous modes, something like a classic Play By Email system. And you’ll be able to play alongside or against your Switch- or Xbox-equipped friends.

The good news, though, is that Wargroove also supports local co-op, and it allows you to completely customize the ruleset for all your multiplayer battles.

The more we learn about Wargroove, the more excited we get about it – last week, we learned about how powerful Wargroove’s battle and campaign editor are, and this week we got a shiny new anime-inspired trailer.

Also, one of the game’s playable commanders is a dog.

Wargroove has a playable dog commander and I feel specifically targeted pic.twitter.com/FLTGO64yVk

All this is on top of the 12 campaigns that will be included with the game at launch – not bad at all.

Your turn: The best strategy games on PC

Wargroove launches Friday, and you’ll be able to find it on Steam. And hey, you’ll be able to play with all your Switch-toting comrades when it does. For those of us with fond memories of Advance Wars, this is all sounding pretty good.