There’s a cabal of evil geniuses working at Chucklefish. As the developer of Starbound, the studio gobbled up the fans of creatively-minded survival that Minecraft and Terraria had created, swallowing Steam’s playerbase for the duration of Christmas 2013. Then, as the publisher of Stardew Valley, it tended the land Harvest Moon had left barren – bringing serene countryside escape to PC, and claiming an eager audience in the process. In short, Chucklefish has become the master of the surprise Steam takeover.

Its next trick? Turns out the generation weaned on Advance Wars has long since reached adulthood, and the series itself came to a halt a decade ago – long enough that the drip of nostalgia has become a well, deep enough for Chucklefish to stick a great big bucket into. That’s Wargroove – a game that unapologetically, lovingly, recreates the formula of the handheld queen of turn-based strategy.

As if that wasn’t shrewd enough, the team is using dogs against us, tapping into gaming Twitter’s weakness for the cute and fluffy. As well as humans, vampires, and great walking trees, Wargroove armies field battlepups, the most prominent of which is the golden retriever and sometime general Caesar.

During skirmishes, Caesar barks orders to his crossbowmen before rolling onto his back, showing off the custom armour fitted adorably to his upturned tummy. It’s pure, calculated evil, and I’d be dead against it if it wasn’t making me really quite happy.

Wargroove, like Advance Wars before it, is hardcore strategy with the edges smoothed off; a philosophy made clearly visible on-screen. Hover over a unit with the mouse – or a controller, since a game has never been so clearly meant for the Switch – and your selected grid will be housed within a box so chunky it wouldn’t look out of place in a children’s soft play area.

Character heads are blown up to Funko Pop proportions, and battles play out on a vague scale

Character heads are blown up to Funko Pop proportions as part of a cuddly pixel art aesthetic that allows battles to play out on a vague and changing scale. Castles and units typically take up one square each, but another map might send those same units to fight through the halls of a castle hundreds of squares across. The fact that this discrepancy isn’t wildly jarring is testament to the ease with which Chucklefish has made a sprawling strategy game seem approachable.

Yet it’s important to understand the difference between the way units appear and what they represent. When two opposing soldiers meet on the map, the fight unfolds into a brief but lavish cutscene that reveals each to be a whole squad. A single charge or volley can easily cut a unit’s numbers in half, which is critical, because it also halves its ability to retaliate. Two units of pikemen might be equally matched, but whichever gets the first strike renders the other almost useless. That fact turns map encounters into a dance in and out of range – you’re forever looking to get that initial hit in, without exposing yourself to the same from other nearby units. It’s a dynamic that works to make Wargroove less predictable, since a sizeable contingent can quickly be reduced to ineffectiveness if its general misjudges the distance to the enemy. 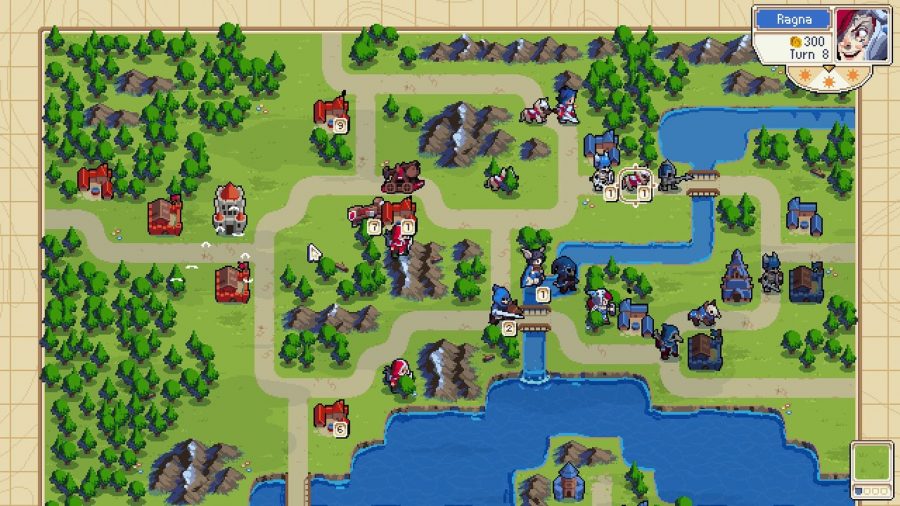 You could be dancing the tango with your mortal enemy, though, and still wind up staring at the Defeat screen if you neglect your economy. The rhythm of a Wargroove battle is defined by an RTS-like system in which towns are captured and contribute gold to your coffers. That gold is then used to produce new units each turn. For a contemporary point of comparison, think of Hearthstone’s growing mana pool. Since in single-player matches you tend to win more towns as you go along, your expensive heavy-hitters tend to come later in the fight, as you upgrade from battlepups to trebuchets, lending matches a natural climax. Every unit has its role, though, since each is effective against some opponents and vulnerable to others. If only the game were better at showing that fact – the muddy chart that displays this interplay is a rare moment where Wargroove’s pixelated presentation fails.

Wargroove's optional side missions are often its most rewarding - not least the puzzle maps that squeeze your units into a smaller space, strip your ability to replenish them, and force you to rely entirely on maneuverability, terrain, and your knowledge of unit weaknesses.

Many of Wargroove’s best aspects come with a negative flick of the tail. Managing the flow of troops to your frontlines is crucial, to the point where it becomes a high fantasy production line – wagons rolling back and forth with such frequency that there’s never a pikeman left waiting for his ride outside the barracks. That tempo can be satisfying, but as a result those dances on the front can end up looking more like scrums. Units tend to bunch up around one of the map’s objectives – a stronghold, or the enemy general – as they’re continually reinforced and whittled down.

The scrum speaks to a larger problem with Wargroove, which is that RTS mechanics transposed to turn-based strategy – however simply – inevitably take far longer to play out. Matches can easily top an hour, which is fine if you’re winning, but can also lead to eventual defeats by a thousand cute cuts. Worse, the death of your general means instant defeat. For the most part this is a neat, chess-like design touch – but coupled with levels that introduce fog of war, it can lead to late-game ambushes that snatch victory away. 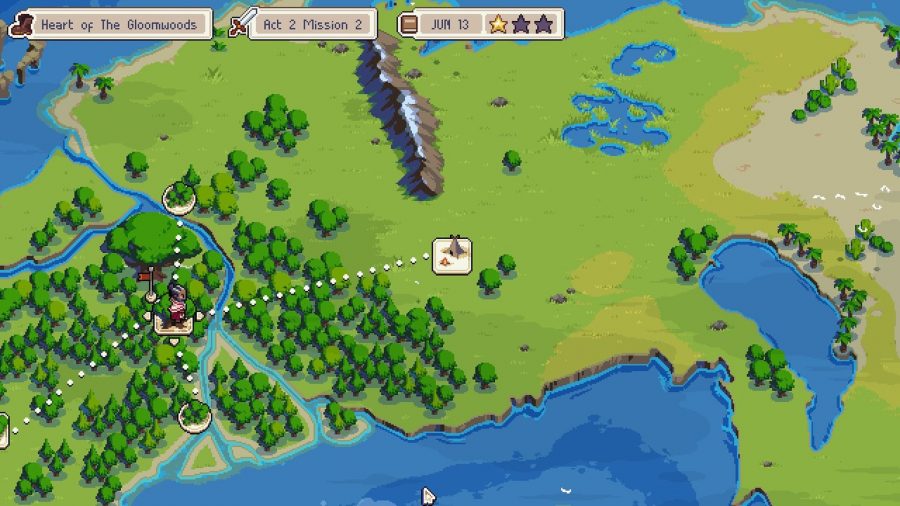 Generals feel like a missed design opportunity as a whole. During the campaign they become fun, if overearnest personalities, but that personality isn’t reflected in their mechanics. While lesser units all deal crit damage under specific conditions that reinforce their themes – pikemen if they’re adjacent to their fellows, knights if they charge the maximum five tiles into combat – generals are just… tough.

The vampire lieutenant Sigrid might be fantastically haughty in her animations, dismissing lesser beings from this plane with a smug flick of her wrist, but she’s mechanically indistinct from Greenfinger the forest lord or, when it comes to it, Caesar the dog. In the shadow of Into the Breach, a nice turn-based strategy game without design innovation can only feel like a throwback.

More than anything, Wargroove is an example of exceptional timing. If Advance Wars had spawned a subgenre of copycats that had continued until today, Chucklefish’s traditionalist effort wouldn’t stand out among them. But since that didn’t happen, it’s a welcome change of pace – even if that pace is sometimes the gruelling march of attrition.

Chucklefish's strategy tribute does nothing worse than Advance Wars, and little better - instead, it’s exactly what it needs to be to spiritually succeed. It’s small, in both character models and design ambition, but it’s probably going to be massive. Despicable.