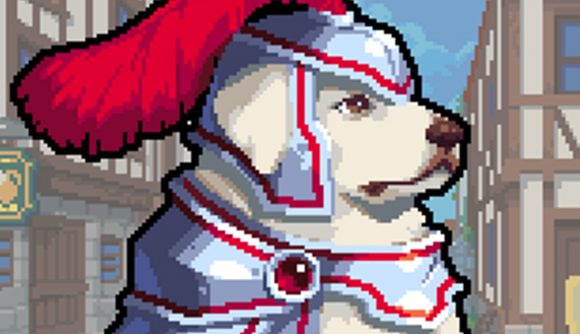 Wargroove is a cutesy take on medieval combat, right down to the sweet little dogs of war you can unleash on your enemies. While this is an adorable war, your units are still out to kill one another. If that sounds like a fate too cruel for the puppies, the developers at Chucklfish agree – that’s why, midway through development, they made sure every single dog would live to fight another day.

You might’ve seen clips of the dogs escaping combat making the rounds on the internet, or seen folks lamenting that this wasn’t the case at older preview showings. Since the good health of digital hounds is our top priority here at PCGamesN (RIP, JPEG Dog), we reached out to Chucklefish to find out exactly what prompted the change.

“I think it’s fair to say that at Chucklefish we’re a team of animal lovers with a few resident office dogs (and even an the occasional office snake),” community lead Katy Ellis tells us, “so there was always the feeling internally that we should change the dog defeat animation.

“It just felt really sad seeing them dying and a bit of a hollow victory against a cute dog! After showing the game at a few consumer shows and seeing players reacting the same way towards the dogs, we decided to go ahead and change it.”

This didn't used to happen! I remember playing an early build of Wargroove where the dogs died like everything else and hearing @hownottodraw demand that they change it. Amazing. https://t.co/XCyxKqHK56

Lead programmer Rodrigo Monteiro tweeted about the change back in November, adding that “We had this feedback A LOT at conventions!”

Reviews of the strategy game have hit the internet today, and most of the Wargroove scores have offered praise for its take on the Advance Wars formula – though in our own Wargroove PC review, Jeremy reckons it doesn’t do enough to differentiate itself from its inspirations. (I can assure you that Jeremy is pro-dog and that his criticism has nothing to do with the continued safety of these sweet animals.)

Tactical reading: Check out the best strategy games on PC

Wargroove officially launches for the world on February 1, so you don’t have much longer to wait before you can play it for yourself. Rest assured that no dogs were harmed in its production, and they’ll remain safe throughout your command.