There are lots of strange suns overlooking the oddball planets in the 40K universe, and on Relic’s world, dawn only comes around twice a decade. Each time it’s an event – a different vision of what a Warhammer RTS could be – and ushers in new possibilities. Just imagine what Dawn of War 3 mods could be now, in the age of Steam Workshop.

This time, the series returns to a world where mods can reach larger audiences than ever before. Here’s what we hope to see land in our download folders, like drop pods on an alien battlefield.

A rulebook’s worth of extra Space Marine chapters

Dawn of War 3 will launch with just three factions: Space Marines, Eldar and Orks. Relic have sensibly picked the most-played races of previous games to begin with, but left the weirder and wilder corners of Games Workshop’s fiction unexplored.

While the Imperial Guard, Chaos et al will surely follow in expansions, just as they did in Dawn of Wars past, Relic are likely to leave the many and varied Space Marine chapters of the tabletop game alone (in fact they invented their own, the Blood Ravens, rather than deal with existing lore). That means modders are free to do as they wish with the likes of the ever-popular Space Wolves – basically the Imperium’s Stark family, down to the furs – and the hot pink heretical hedonists in the Angels of Ecstasy.

Skirmish-level combat in the style of Dawn of War II

Relic have re-embraced the screen-filling approach of the original Dawn of War for the new sequel. The series is once again centered on massive armies fed by the constant churn of nearby bases. But Dawn of War II offered an alternate take that was just as good: a smaller-scale game about creeping between cover that was more reminiscent of Company of Heroes than StarCraft.

It’s up to modders now to pull that version of the game into the modern world – to refocus Dawn of War around tiny squads of persistent characters. It’s far more satisfying to watch jetpacked assault marines crash-land into their enemies when they’re in close-up, after all. 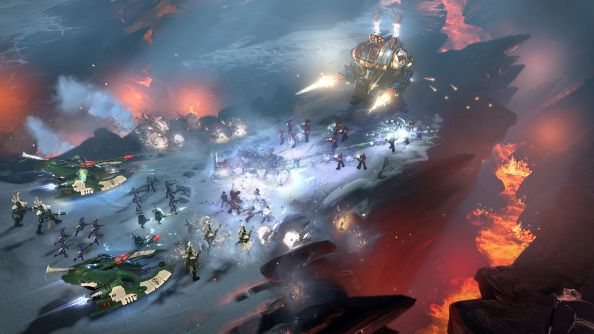 There’s a period in the 40K universe – a long time ago, in galaxies far, far away – that’s arguably more compelling than the one the tabletop game concerns. The 31st millennium saw the birth of the Chaos marines, in a vast civil war that set man against man and claimed 2.3 trillion lives – according to the records of the Black Library, at least.

This was Warhammer’s Paradise Lost: a tragic battle between angels and an intensely personal struggle for the Emperor of Mankind, then a towering hero rather than a rotting god-king in a chair, against Horus, the Warmaster he had trusted like a son. Could you ask for more potent material to turn into a fan-made campaign?

There are two post-apocalyptic reference points that feed into all of Games Workshop’s future fiction: Judge Dredd, and Mad Max. When the latter returned in last year’s Fury Road, the resemblance of George Miller’s frenzied speed freaks to Warhammer’s own orks was uncanny. The rolling, ramshackle convoy stirred up to chase down Furiosa was a WAAAGH! in everything but name.

Replace Relic’s greenskin warboss with patriarchal tyrant Immortan Joe, and the ork war boyz with, well, the war boys, and you’re halfway to finishing what will surely be the top skin-swap on the Dawn of War III Nexus.

A point system for armies 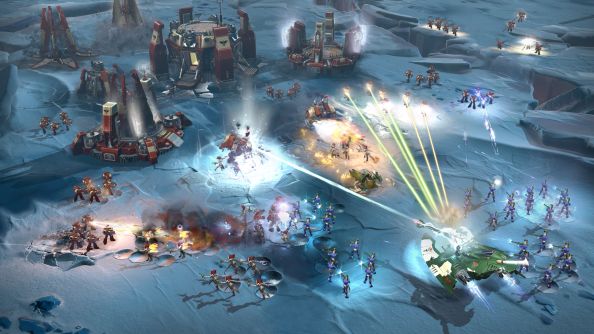 Tabletop Warhammer players have long known the joy of totting up a 1,000 point army in their heads, before overpowering and outmaneuvering an equally-strong enemy. In fact, one of the chief complaints about Games Workshop’s newest ruleset, Age of Sigmar, stemmed simply from the fact that it launched without a point system.

In this dream mod, base-building would be out of the question. You’d feel the cost of a lost unit all the more keenly, knowing that you couldn’t simply barf out another.

Blood for the blood god

Relic’s final slice of Dawn of War II DLC was a gore mod that turned up the frequency and scale of blood effects, leaving nice, white Eldar uniforms covered in the claret exploding from their comrades. Such was its gratuity that the developers warned it made battles “hard to see”.

Basically, this needs to happen again in Dawn of War III. Make it so, modders. Do it for Khorne, the Chaos god of war, murder and senseless destruction. Do it for the lord of rage, sat on his skull throne. Blood mods, for the blood god! And maybe also a free camera mode. Ta.

That’s our brains emptied out onto the page – is there anything else you’d particularly like to see the Dawn of War community turn their tools to? Do tell in the comments.