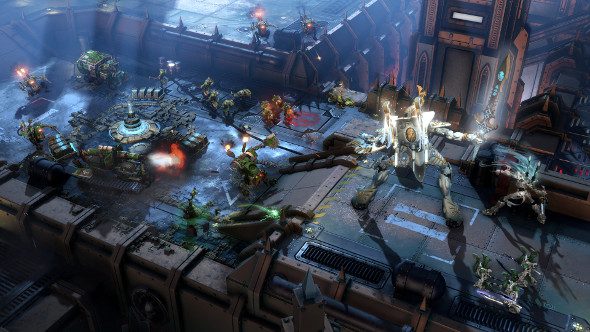 There’s only a few weeks left until Dawn of War 3 releases on April 27, so Relic have released a couple of new videos diving into the nitty-gritty of multiplayer in their upcoming RTS.

Pit more forces against each other in our list of the best war games.

The first trailer, embedded above, appears to be your standard games industry multiplayer playtrhough. You know, the ones where some people pretend to be real humans, even though they’re actually reading from a script.

Refreshingly though, the dialogue here seems authentic, however. Relic say it’s a splice of game footage, complete with captured live recording, from a “particularly suspenseful 3v3 match”. I have no reason to doubt them.

In another new trailer, embedded below, Relic ease noobs like myself in with a little primer. This will hopefully mean new players get stomped a little less when they do wade into the multiplayer battlefields.

Have a watch of that one here: