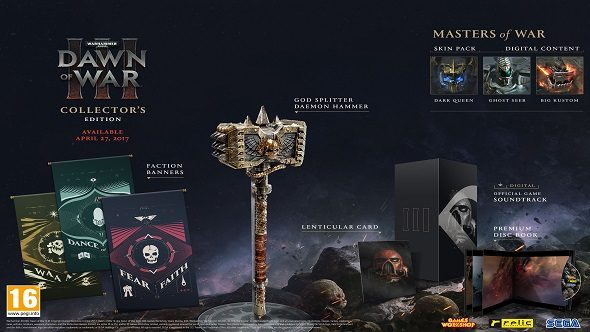 Relic Entertainment and SEGA have announced today that the long awaited third installment of the Dawn of War franchise will be releasing on April 27. They have also announced the game’s three formats and the special pre-order bonuses available for eager battle brothers.

You can hear our impressions on Dawn of War 3’s multiplayer right here.

Besides the standard edition which just contains the game, Dawn of War 3 will be getting a Collector’s Edition and a Limited Edition. The Collector’s Edition comes with a premium disc book, a copy of the game’s soundtrack, a lenticular art card, three cloth banners to match Dawn of War’s three factions, the Masters of War skin pack and a special replica of the Godsplitter Daemon Hammer. For those who aren’t tooled up on 40k lore, this is the signature hammer of Gabriel Angelos who commands Blood Ravens 3rd Company. I’ve also heard it’s great for cracking open nuts.

“We’re thrilled to tell fans know that they don’t have to wait much longer to return to battle,” said Philippe Boulle, game director of Dawn of War 3. “The whole team can’t wait to bring back Dawn of War, bigger and better than ever. April can’t come soon enough!”

The Limited Edition will just contain the soundtrack, art card and disc book, perfect for the Space Marine on a budget. Everyone who pre-orders Dawn of War 3 will get access to the Masters of War skin pack, a collection of three cosmetic skins for Dawn of War 3’s Super Walker Elites.

If you pre-order Dawn of War 3 on Steam, you also get a special skin pack for Company of Heroes 2 alongside the Masters of War pack, which reskins tanks in the colour of five different Space Marine chapters.