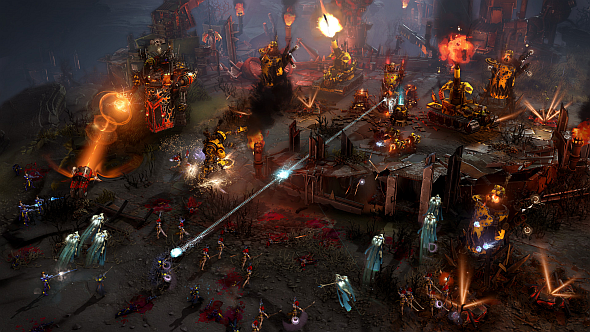 Not long now until you can take to the grimdark battlefields of the grimdark 41st millennium and blast the grimdark out of some orks, Eldar or space marines, according to your preferences. Here’s exactly when you can get stuck in.

A good space marine goes into battle fully briefed – though an ork probably doesn’t. Anyway, here’s everything we know about Dawn of War 3.

Dawn of War III unlocks at 07:00 Pacific time today. Unlike in some games it looks like that’s going to hold around the world, so here’s what it looks like in major cities near you:

Here’s the announcement on Steam. If you’re still not sure what time the game goes live for you, normally we’d suggest you check Steam’s unlock timer – the bit on your local Dawn of War III store pagewhere it says “this game will unlock in approximately” however long.

Amusingly, Dawn of War III’s timer doesn’t correlate with the times given by Relic, above. You can tell because when it says ‘approximately’, it always rounds down from the top of the hour, so the estimate is the same regardless of whether the time is 21:01, 21:30 or 21:59. If midnight is go-time, in all three cases it’ll say there’s two hours to go.

In this case, Steam’s timer seems to suggest that Dawn of War III unlocks at 18:00 BST (10:00 Pacific). The devs are generally right about this sort of thing, so we’re still guessing 07:00 Pacific.