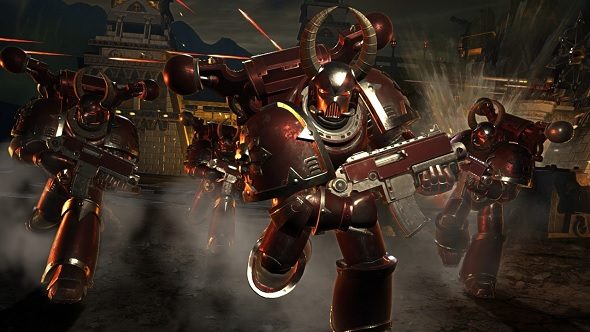 As part of its development roadmap for their massively multiplayer shooter Eternal Crusade, Behaviour Interactive have just released a new free to play option for Space Marines on a budget. This free version of the game gives players access to four of the game’s five classes at a reduced rate of character progression.

If you’re in the market for shooters, this list of top PC FPSes should see you right.

The original plan for this free to play iteration of Eternal Crusade was that it was going to be limited to Orks only, under the title of “Free to WAAAGH!” but this was dropped and replaced with the system we see now.

If you’re well into purging aliens for the Chaos God of your choice, you can upgrade your free account by buying 20,000 Rogue Trader Credits. The whole goal of this update is to give players a chance to experience Eternal Crusade before popping down any cash to transition to the full game.

“To be brutally honest, we wanted more people to shoot at and try out the game before investing their time and money, and this is part of that strategy. In our tests on pricing and positioning, people wanted more options, so we adapted and delivered,” said Eternal Crusade’s senior producer Nathan Richardsson.

Behaviour have also been generous to their already existing player base, giving all players who have previously bought a copy of the game 20,000 Rogue Trader Credits and a Steam code for a gift version of Eternal Crusade. If you have a friend who has always been interested in giving it a try, now is the perfect time to get them on the field of battle.

All editions of Eternal Crusade can be found on Steam, with the Imperium edition currently on sale for 10% off.