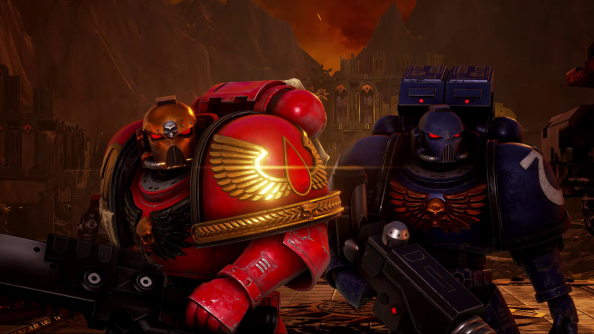 The universe of the year 40,000 is a maximalist place of constant crescendo, and three or four years ago Behaviour Interactive embraced just that – filling the void of THQ’s Dark Millennium with the public promise of a systemic, player-directed world in the vein of Planetside 2 or Eve Online. The Behaviour team were pulling inspiration from Diablo-alikes and Left 4 Dead with the aim of forging an endless MMO. ‘Eternal Crusade’ was to be taken literally.

Like to watch your enemies fall under bolter fire? Play one of the best shooters on PC.

“There were technology companies we were going to be working with who were going to be enabling a different game,” says senior producer Nathan Richardsson. “A huge open world with thousand player battles. That didn’t quite work out.”

Like the keepers of the Emperor’s life-sustaining throne in 40K, Behaviour came to a sorry realisation: the technology would fail them. At the start of this year, they fundamentally reimagined Eternal Crusade in Unreal Engine 4 as a multiplayer shooter. Global-scale factional warfare would be tracked on a meta-map, and the outcomes of battles worked out on large battlefields reminiscent of, well, Battlefield. The crunchy core combat is currently in testing on Steam Early Access. 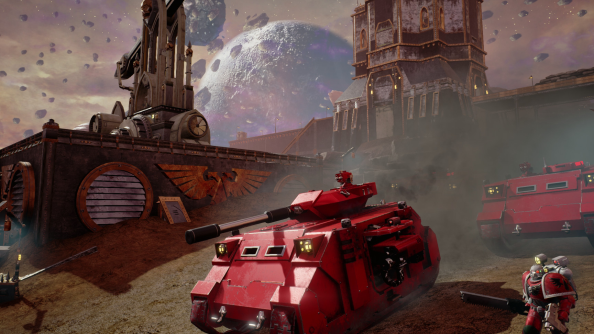 “We are chasing the fun rather than the numbers,” explains Richardsson. “The numbers don’t equal fun, so we started small and focused on the shooter itself.”

‘Shooter’ is a bit of a misnomer. As lead game designer Brent Ellison points out, although Warhammer 40K’s future is far flung, its combat is rooted in Warhammer Fantasy and the medieval wargames that came before it.

“Fans love that,” he says. “It means that even though you have sniper rifles and lasers and all that sort of stuff, the battles need to have a certain immediacy and closeness to them.”

Expect meaty melee, which Behaviour reckon has rarely been attempted on this scale before. Where Star Wars Battlefront only increased the range of the Battlefront formula with potshots in the trenches of Hoth, Eternal Crusade encourages players to close the gap fast. 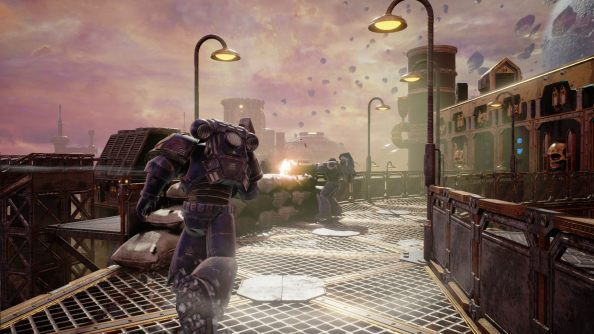 “[Melee] has gone through the most iteration, and the reason it’s so difficult is that you need to have multiple deep actions for two players to take when they get close to each other,” expands Ellison. “In a context where someone else could be standing next to them and shooting them, killing them in two seconds.”

Behaviour have stripped their game of shotguns, to ensure that power-armoured fisticuffs remains an attractive option even in a universe of psychic powers and Razorback tanks. It’s working, perhaps too well: at present, melee is too popular.

“Our goal is 50/50,” says Richardsson. “The reason we’re doing Early and Founders Access is not to get funded, because we are funded. [But without] the feedback of 25,000 people we wouldn’t have found the fun on our own.”

Outside of battle, players will occupy a Destiny-style hub – picking their fights from a world map. As a space marine, for instance, you might help face down an army of Chaos players – currently the only non-Imperium faction available, but later to be joined by Eldar and Orks – in order to ‘flip’ control of an outpost over to your side. 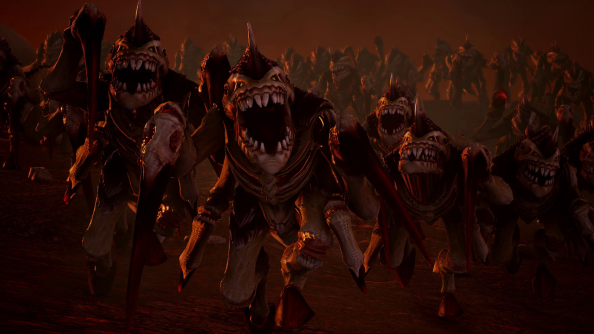 “It’s a very pragmatic, effective way of making large universes today,” reckons Richardsson. “You have a meta layer up top, and then you can go into varied types of gameplay. Even Destiny is using the same maps with different game modes, and we’re doing the same.”

The 15v15 maps in Early Access will come to represent particular points on the former Imperial fortress world of Arkhona. Larger, 30v30 siege maps will stand in for fortresses – key objectives in the metagame. Capturing a fortress can grant the winning faction advantages and contribute towards victory in an overarching, persistent campaign.

“It’s not just about eradicating each other,” Ellison clarifies. “There are specific goals that a faction will have to fulfil during a campaign.”

In faithful 40K fashion, there’s only war on the menu, but it comes in a couple of varieties. PvE scraps against swarming Tyranid AI will be resolved on the same meta-map, offering new bonuses to the faction that volunteers for pest control. 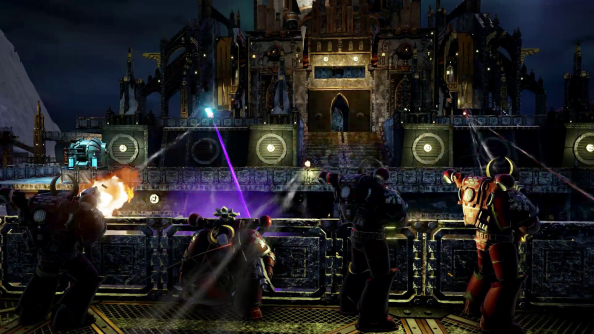 The system Behaviour describe – and that’s all there is to do at this stage, before it’s implemented – is a little reminiscent of the rolling campaigns Games Workshop conduct for tabletop Warhammer, lending greater meaning to the board-level power struggles.

Eternal Crusade certainly isn’t an MMO, as we traditionally know it. But then is World of Tanks? Or Crossout? Or, since we’re on the subject, co-op shooter The Division? What’s clear is the contrast in Behaviour’s approach: from the overreaching of a few years ago to something every 40K player and painter understands – the slow and painstaking assembly of a tangible plaything.

“It was a down to earth moment,” remembers Richardsson, a CCP and Eve Online veteran who, upon reflection, is convinced that 3,000 player battles are “not fun” anyway. And yet a twinkle of that old ambition remains. 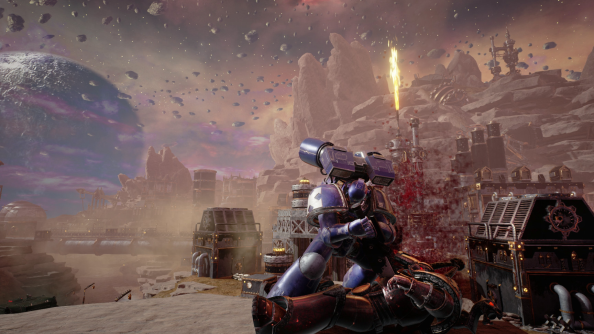 “We use Amazon’s cloud and they’re coming up with their own gaming service, so we’re going to see what they can actually do for us,” he says. “I think Google and Amazon would [eventually] be able to pull in some larger backend, which enables us to do larger things in the future. So maybe the dream will eventually come true.”

In this sponsored series, we’re looking at how game developers are taking advantage of Unreal Engine 4 to create a new generation of PC games. With thanks to Epic Games and Behaviour Interactive.