Warhammer 40,000: Inquisitor – Martyr has all the grimdark elements of the 40K universe that you’re no doubt familiar with: the purging of aliens and Chaos worshippers, over-the-top violence and gore, giant warriors fighting in giant space cathedrals – it’s all comfortingly familiar.

And yet it’s also a bit different from the multitude of Games Workshop adaptations that have come before. It’s an action-RPG for one, being designed by Neocore, of The Incredible Adventures of Van Helsing fame, and rather than being a game about Space Marines, it’s the shadowy Inquisition that are in the limelight.

“We always thought that Inquisitors – who could come in many shapes and sizes – would be very good subjects for a videogame because they are basically secret agents,” Viktor Juhász, Martyr’s lead narrative designer explains. “They can be investigators, but they can be warriors, like Space Marines, and we wanted to make a game about these larger than life characters who have diversity as well.”

The only Inquisitor that’s been shown off so far falls on the warrior side of this spectrum, and he’ll probably be the one that’s closest to the Space Marines. He’s a Crusader, crammed inside a gargantuan suit of power armour, wielding a chainsword, bolters and plasma rifles. He’s the tank of Martyr.

As he walks around the cavernous monastery – a huge space fortress, essentially, which was once an Inquisition stronghold – that will contain most of the game’s single-player story mode, he makes an awful racket. Every step he takes has weight, and the noise of his massive boots hitting the metal and stone echoes throughout the giant halls.

Two more classes will be unveiled later, but despite prodding and pestering, all Neocore will reveal for now is that one will be a woman. Everything else is still very much a secret.

Van Helsing, though it took a few pages out of Diablo’s book, was a surprisingly refreshing, inventive ARPG, boasting an interesting weapon and skill system along with a handy (and spectral) NPC companion. Juhász says that they want to achieve that same freshness with Martyr, and some of that will be achieved by building the RPG around the 40K universe’s lore. 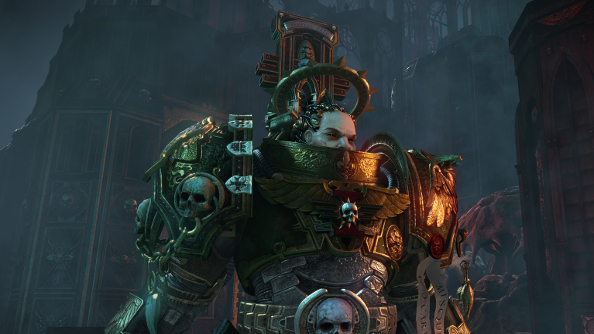 “In Martyr we have the 40K lore to stick to which means that, for example, we are going to omit health potions because they’d pretty look ridiculous in the 40K universe. This time we have the combat drugs: it takes the traditional potion gulping to a new level.”

Similarly, the traditional loot system has to be overhauled. Inquisitors are not pack rats or D&D-style adventurers, picking up every piece of tat that they find, so making enemies explode into showers of loot wouldn’t really work in a 40K game. Instead, weapons and gear are going to be tied to a crafting system.

“It’s going to be one of the most challenging things that we have to work out,” explains David Martha, Neocore’s PR and marketing manager.

The loot and crafting system is is all being figured out behind closed doors, but Juhász hints that it isn’t going to be like those you might see in other RPGs. Neocore need to find a way to make the system fit with the restrictions laid out in the 40K lore, since ancient technology and xeno weapons – which only Inquisitors are given permission to use – are mostly forbidden, and most humans aren’t even allowed to tamper with them. 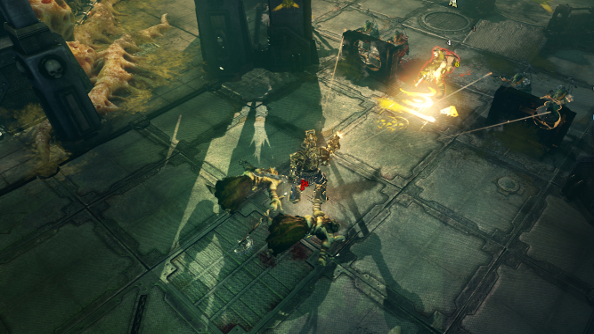 In the demo that Neocore show off, the Crusader Inquisitor switches between bolters, plasma weapons and his chainsaw sword, and the skills that he employs to eviscerate his Chaos enemies are all tied to these weapons. Martha and Juhász are insistent that the Inquisitors will have access to a wide range of deadly tools, from exotic alien weaponry to the iconic death-dealing gear of the Space Marines.“That’s the perk of being an Inquisitor,” says Martha.

As the Crusader dispatches the servants of Chaos, pillars and walls crumble and fall as projectiles hammer into them. Martyr is blessed with a fully destructible environment. “You will be able to destroy pretty much everything,” Juhász boasts. And it’s not just for show. Unusually in its genre, Martyr uses a cover system, with foes and Inquisitors alike able to use the environment to get a defensive bonus, and all of that cover can be blown up. Juhász hopes that it will make the game feel more tactical.

It certainly looks more tactical than your average ARPG. It’s a little slower and more thoughtful, and enemies don’t just swarm players like they do in, say, Diablo 3. They’ll hug walls and pillars to avoid being riddled with bullets, and if their position is threatened they’ll look for new places to slink behind. Other enemies might be more aggressive, charging toward the player, or smarter, flanking them. There’s a hierarchy too, and squads of foes will take orders from their leaders.

Right at the top of the food chain are the bosses and their lieutenants. In the demo, the Crusader goes toe-to-toe with a grotesque Ogre: a gargantuan brute that ponderously stomps around the battlefield, taking great big swipes at the Inquisitor. The tactical elements that Neocore want to emphasise appear again, because these larger boss and sub-boss enemies will have targetable limbs and weak spots. In the battle with the ogre, the Inquisitor limits the monster’s offensive capabilities by shooting off its arm before blowing up its foul poison gland. It’s not a pretty sight. 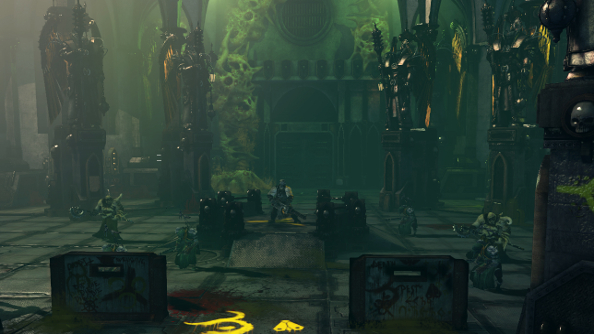 Along with the more directed single-player campaign, Neocore are also working on an ambitious sandbox mode that can be played solo or in squads of four. It’s set in the Caligari sector, where Games Workshop have apparently given the team a great deal of creative freedom to populate it and play with. It will be fat with countless worlds and an effectively infinite number of procedural battlefields and missions, as well as a broader array of weapons and gear. Inquisitors will even be able to net themselves vehicles. Not unlike Arrowhead’s Helldivers, this campaign will also have a metagame, where choices made by the entire community will have a tangible effect on the power struggle.

“Imagine we have a star system which has been invaded by the Orks, for example, and at the same time on one of the planets in the star system there are Dark Eldar gaining power every day,” Juhász offers as an example. “[For the players] these events happen simultaneously, so you have to decide which problem to tackle first because you can’t be at two places at once. We monitor how players react to this event, which means if the majority of the players decide to deal with the Orks, then the Orks will be eliminated [in that part of the sector], and that allows the Dark Eldar to gain more strength.”

These events will help build the sector’s story, and Neocore promises patches and updates to keep this story going. “It’s a living, realistic feeling sandbox,” says Juhász, “and Inquisitors are going to be part of this story as well, as they can gain reputation in the star system.”

Martyr’s sandbox campaign will be cooperative, but Neocore also plan to introduce an indirect PvP mode, giving every player a stronghold that they can expand and customise, but can be threatened by other players. It’s a lot like the FOBs in Metal Gear Solid V: The Phantom Pain. 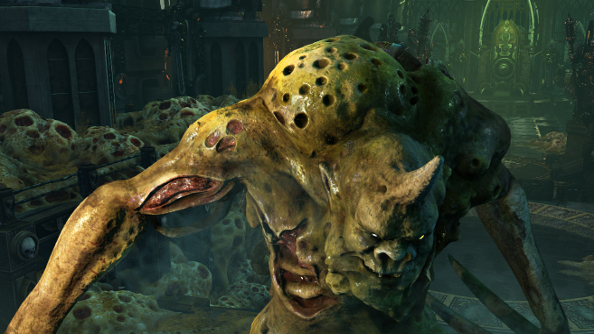 While the Inquisitors are technically all on the same side, they’re a sneaky bunch, and act independently, sometimes arguing and attempting to get one over on each other, so Neocore reckon that this indirect PvP does make sense for the 40K universe.

“The Inquisition is a huge organisation and it’s the defender of mankind, so we can’t have Inquisitors waging war against each other,” states Juhász, “but still, in the shadows, the Inquisition has plenty of factions squabbling over numerous things. This means that there’s a chance to show the shadowy side of the Inquisition with the puritans and radicals trying to overcome the various factions, so it fits the 40K universe.”

“It’s an excellent way to piss off your friends,” Martha adds.

Even though it’s surrounded by an ocean of Warhammer and Warhammer 40K games, Martyr stands out. It’s undoubtedly Neocore’s most ambitious game, but after the surprising quality of Van Helsing, this is a studio worth betting on. Warhammer 40,000: Inquisitor – Martyr is due out in 2016, with a beta also on the cards.