Warhammer games have been failing you. A couple – Blood Bowl, Space Hulk – have meticulously recreated the rules of their tabletop counterparts. Others, like Dawn of War, have captured the flame, fury, and nihilism that make Space Marines recurrently popular with teenagers the world over.

But none have committed to the satire or sheer strangeness found in the Warhammer universe – where hot-pink noise marines find pleasure in the cacophony of battle, and tribes on backwater worlds offer up raw materials for wars they’ll never hear the outcome of.

Warhammer 40K: Mechanicus is different – a turn-based tactics game built on fiction so weird it could sit in the dialogue boxes of Torment: Tides of Numenera. Playing as a Tech-Priest of the Adeptus Mechanicus, you lead a force whose love for machines equals their fondness for Latin, raiding the tombs of the Necrons in a desperate bid for dangerous knowledge.

It’s a premise that has caused Jeremy and Matt to fall totally for the doctrine of the Omnissiah. Hail the god in the machine.

Jeremy: When we were growing up people were fond of claiming that ‘men are from Mars’, but as I understand it that’s literally true of the Adeptus Mechanicus. Who exactly are they, Loremaster Matt? 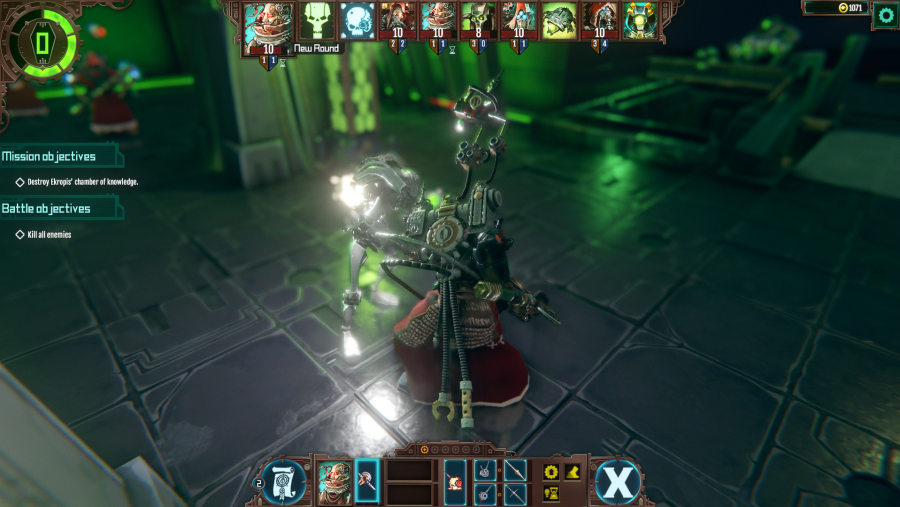 Matt: [accesses data-codex] They’re basically the engineers of the Imperium of Man, camped out on Mars which, in the 41st millenium, is now a planet-sized factory. All those giant mech walkers and cathedral spaceships you’ve seen elsewhere in the Warhammer 40K universe? Created by the Adeptus Mechanicus. They’re also known as the Cult of the Machine, which gives you a fairly accurate picture of them: a legion of religious zealots who are so obsessed with the ‘purity’ of technology they literally replace their limbs with robotics. They’re mad, but in the best way possible.

Jeremy: I think I love them. They’re definitely that bloke in the office whose eccentricities are tolerated because nobody else knows IT. As I gather they don’t even worship the God-Emperor, which would be considered blasphemy anywhere else, but spend all their time fancying an embodiment of all their sleek machinery instead. They’re not quiet about it, either. One of your advisors in Mechanicus is a Tech-Priest called Lector-Dogmatis Videx, who covers himself in tiny pieces of scripture from the Machine God, as if he’s cut himself shaving. I think he’s my favourite, actually – constantly scolding his comrades for their curiosity and reminding them that ignorance of all things alien is a moral tenet of their faith. Who’s your fave?

Matt: I’m particularly taken by Scaevola, a Dominus who has augmented themselves so much with technology that she now talks in computer code. But it’s difficult to choose when each of the Priests have such powerful personalities. They’re each written akin to the literary characters of the Planescape universe, with unique tones and agendas. For instance, Tiresus thirsts for knowledge of the Imperium’s enemies, a stance that causes frequent arguments with Videx, who blindly believes that anything alien should be obliterated in a hail of galvanic rifle fire.

Jeremy: They’re wonderfully distinct, which is a real achievement for a bunch of talking skulls wrapped in robes and life support equipment. Mechanicus is a low-budget game, so there’s no VO or animation involved, yet writer Ben Counter does a phenomenal job of pumping personality through those tubes. I’m particularly fond of the way he doesn’t shy away from Warhammer specific terminology – every time somebody says ‘noosphere’ I feel like I don’t have a clue where I am and I love it. 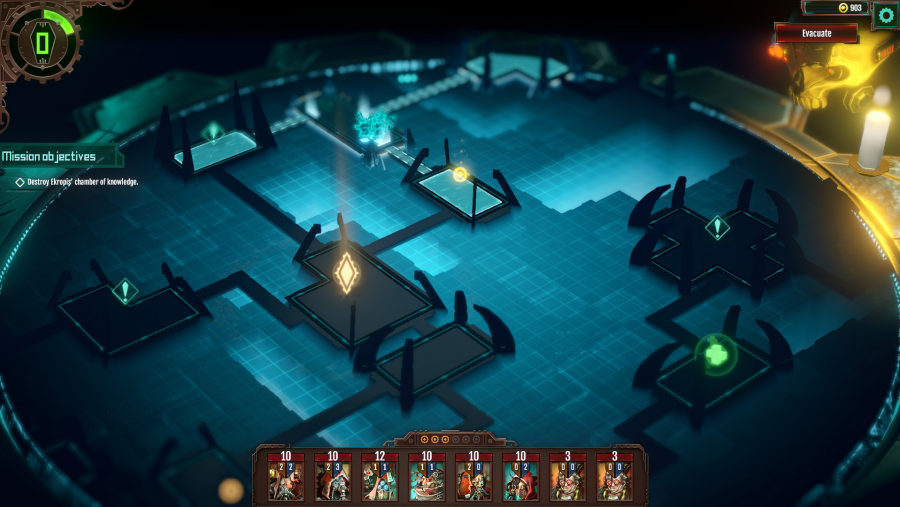 Counter has a whole shelf of Black Library novels to his name, so his knowledge of the universe was never in doubt, but gaming is stuffed with scripts from experienced writers whose work didn’t translate to the medium. The fact that his does in Mechanicus can only be testament to the fact that Bulwark Studios made room for it. What do you make of the way the game itself interprets the universe?

Matt: This is where Mechanicus’ actual, erm, mechanics, come into play, and it’s a world away from many Warhammer 40K games. Typically, we’re put in command of Space Marines: ten-feet-tall genetically perfect warriors in armour three-inches thick. They’re the ultimate power fantasy. But this time we’re directing normal humans. Sure, they’ve got metal legs, arms, and sometimes even faces, but they’re far from indestructible. As such they die. A lot. And quickly.

Sold on Mechanicus' lore? Here's a breakdown of its mechanics, from the terrifying lack of cover to the systems it rips straight from the Codexes of the tabletop game.

Mechanicus is punishingly hard. It’s an XCOM-style game without cover, so there’s no opportunity to hide. You have to outmanoeuvre your enemy, there’s literally no other option. And, to make matters worse, you’re fighting the Necrons: hulking robotic skeletons armed with guns that tear targets apart atom from atom. Some of them phase-teleport and pin you down with sniper fire. Others are literal giant metal spiders. Oh, and they can all self-repair, too. This is the relentless grim darkness of eternal war that 40K is all about.

Jeremy: I kept trying to hide behind things out of habit, and once it became clear that wasn’t going to work I cowered behind the squat servitor units the game let me summon each turn instead. Which is a nice, physical demonstration of the nasty hierarchy of the Mechanicus. 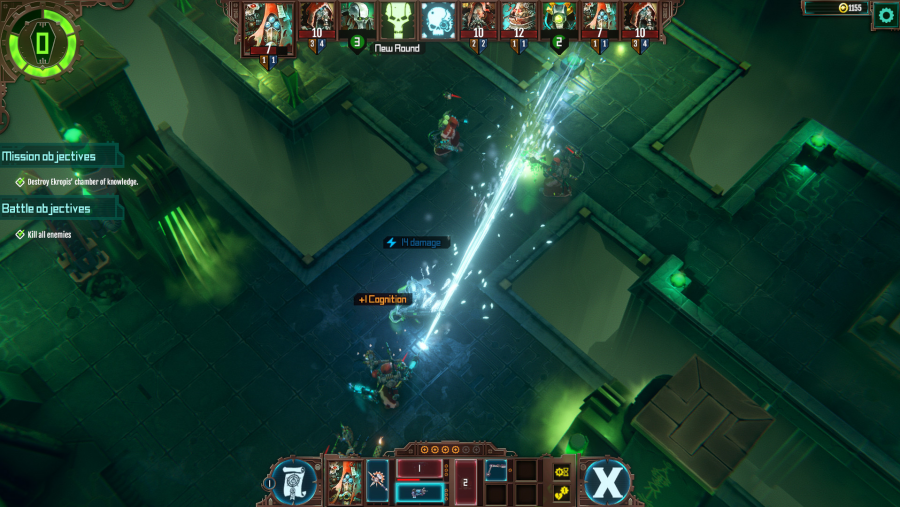 There’s tons of evidence that Bulkwark has designed the game with this specific fiction in mind, actually. Cognition Points turn the knowledge you gain from strange pillars into literal brainpower you can spend on extra moves. In fact, unless you take the time to study your enemy during battle you’re not going to know their weaknesses or even how much damage you’re doing to them – a constant reminder that the Imperium has entered a new Dark Age.

This is a game you couldn’t simply reskin with Space Hulk’s terminators and still have work. It’s taken a curious corner of the Warhammer universe and constructed a game around it. Which feels… new?

Matt: Absolutely. Dawn of War is a fantastic RTS, but it doesn’t feel as bespokely designed for its races as Mechanicus does. And it goes beyond punishing combat, too: the longer you spend exploring the Necron tomb world, the more dangerous it gets, which is a great personification of the universe’s looming darkness. There’s also a recognition of fighting an enemy so impossibly strong that you need to do so while they’re in slumber: if you can’t complete Mechanicus within 30 missions – the time duration until the Necrons completely awaken – then it’s game over.

Jeremy: I’d almost forgotten that part. I would have settled for an XCOM-alike that told a decent story in the 40K universe, but this is clearly something else – something I don’t quite yet understand. Which is fitting for a game about the friction between the Imperium’s wilful ignorance and need for knowledge. I’m looking forward to more.