Videogames based in the Warhammer 40,000 universe tend to focus on the most iconic of its factions – the stalwart Space Marines, the cruel legions of Chaos, and the untamed hordes of the Orks. But there’s a much weirder side to the 41st millennium, and Warhammer 40,000: Mechanicus is wholly dedicated to it.

Mechanicus is a strategy and tactics game that draws heavily on XCOM, and depicts the conflict between two of the universe’s most original and strange armies: the Adeptus Mechanicus and the Necrons. Responding to an ancient call, your Mechanicus force finds themselves on a Tomb World, and must engage in a series of strike missions in order to prevent the slumbering Necrons from awakening.

The titular Adeptus Mechanicus are the scientists and engineers of the Imperium of Man. But they’re not regular old lab coats; they’re religious fanatics that praise the Machine God. Convinced that organic flesh is weak, they ritualistically replace their limbs with bionic components. As you can see, they’re perfect for a game led by an extensive upgrade tree.

Their Necron foes are a machine-like race of humanoids constructed from living metal. Their obsession with death has resulted in an aesthetic that’s basically Ancient Egypt meets Tron via The Terminator. These guys are armed with gauss weaponry that tear apart targets atom-by-atom, but – most importantly – they can self-repair, and bring themselves back from the dead if you fail to stamp them out entirely.

While much of Mechanicus appears to be XCOM with grimdark characters, there’s much more of Games Workshop’s unique rules and lore lurking beneath the series. Let’s take a look at how developer Bulwark Studios has re-purposed the iconic turn-based tactics framework for its own ends. 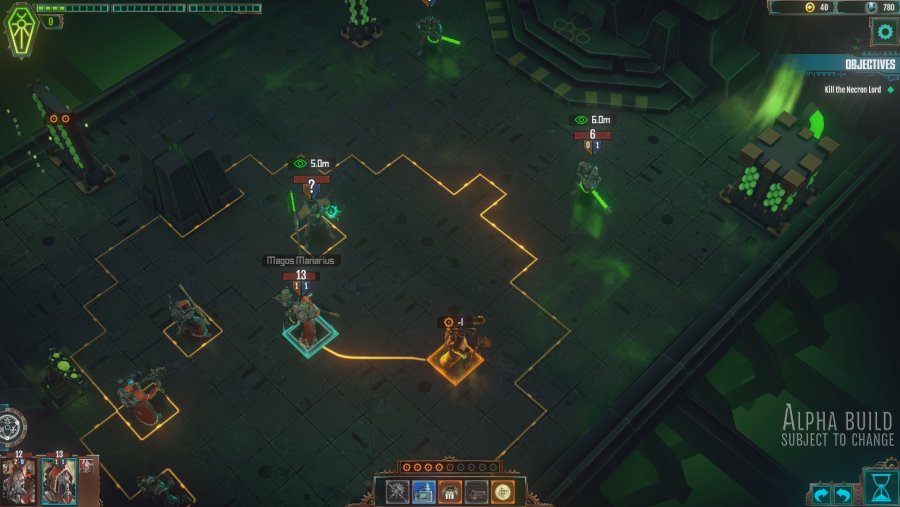 Mechanicus features an isometric camera and grid-based UI that is highly evocative of Firaxis’s XCOM. However, Mechanicus features no cover. The Warhammer 40K universe is very much about units charging at each other across the battlefield, and Bulwark Studios has attempted to replicate this by eliminating XCOM’s slower, hunker-down tactics. There are still hiding spots – positioning remains a vital element – but the emphasis is on advancement, not holding ground.

To encourage movement, there are a number of pillars located around each of the small, chess-board-like battlefields that generate Cognition Points (CP). Harvesting these points is required to fire Mechanicus’s heaviest weaponry, and you’ll absolutely want to make use of them when you see how hard the Necrons hit.

CP can only be harvested by Tech Priests or their Servo skulls. At the start of each battle you’ll be required to field a number of troops, with each costing a point value (40K tabletop fans will be instantly at home). While it may be tempting to send out hardier Kastelan robots over a Priest, it’s only these hooded, bionic chaplains that can provide CP. As such, finding the right balance for each mission is important. 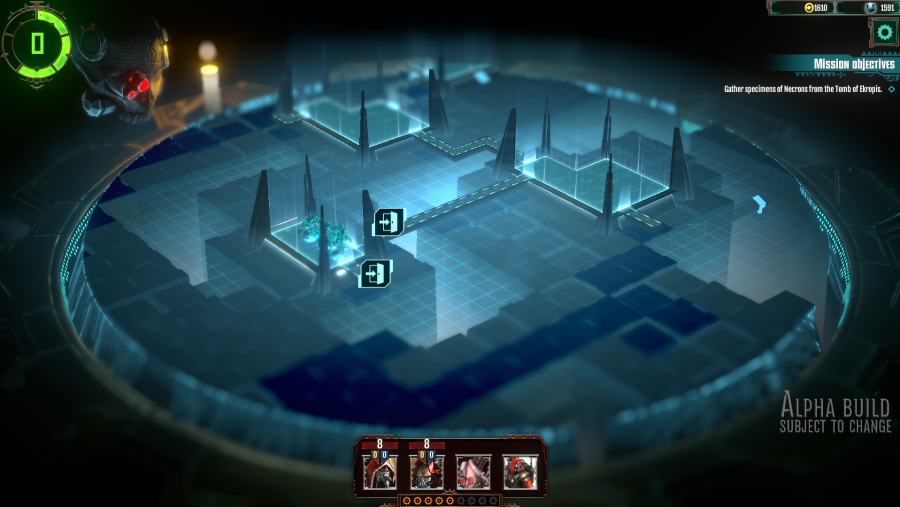 … but it’s also a dungeon crawler

Like many turn-based tactics games, Mechanicus has a tactical battle layer and a strategy layer. But between these is a third segment that’s most easily described as a dungeon crawling layer.

After deploying your force into a mission, you control holographic depictions of the team as they explore the Necron tomb, directing their expedition from room to room. New areas can be home to squads of Necrons, in which case the tactical battle layer kicks in, or your team can discover something more unusual. They may find the corpse of a Skitarii Ranger, for example, which triggers a choose-your-own-adventure style sequence of multiple choice responses that can result in new lore discoveries or additional resources for engineering upgrades. 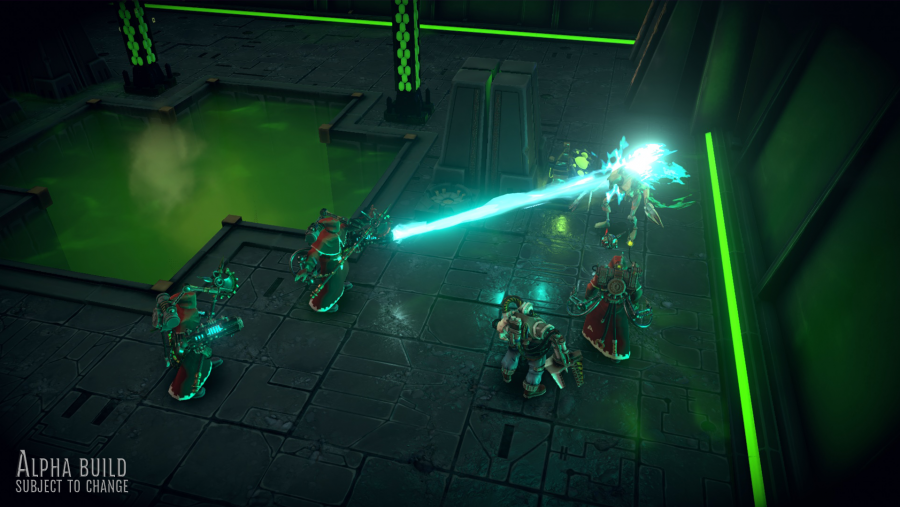 It’s got the tabletop rules…

While Mechanicus is most certainly a videogame and not a digital board game, many of its systems draw directly from the Warhammer 40,000 codexes and rule books. Your team has access to Canticles: prayers to the Machine God that can be used once per mission, and provide some table-turning buffs for the duration of a battle. It’s important to remember that a mission will be made up of multiple battles, so using a powerful Canticle in your first scrap will mean its benefits will be unavailable for the mission’s boss battle.

There are also some reinventions of classic turn-based staples. Bulwark Studios didn’t want to include a reload mechanic, but needed something to encourage a break in the action. Their replacement is the Machine Spirit; weapons can be fired twice in succession, but a third shot will incur the Spirit’s wrath. This could cause your weapon to backfire, shoot the nearest target regardless of allegiance, or simply fire without issue. It’s a risk/reward tactic that’s wrapped in lore and more interesting than spending a turn jamming a new magazine into a galvanic rifle. 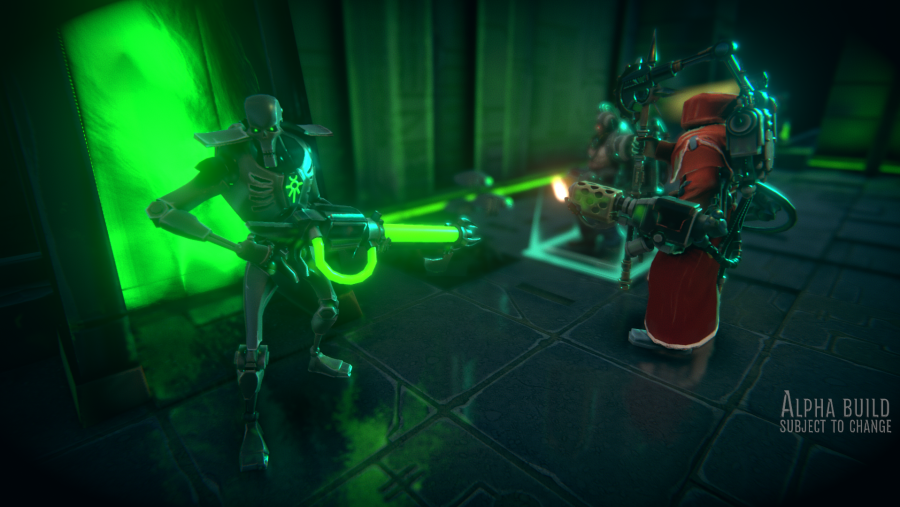 All these elements tie into the greater picture of Mechanicus: the overall campaign itself. The entire game must be completed in 30 ‘activations’ (mission deployments), otherwise the Necron Tomb World will reawaken completely and, well, there’s no stopping the metal menace after that. There are over 50 missions in the game, each issues by one of the Tech Priest Dominus leaders, but there simply are not enough activations to complete them all.

Aside from providing some replayability, this forces you to decide which missions are priority, and react to ones that are on timers. How you prioritise this is up to you – you may want to seek missions from a specific Tech Priest to learn more of their lore and motives, for example (and Mechanicus is very heavy on the lore).

Despite being so systems-heavy, Mechanicus is perhaps the most impressive use of the Warhammer 40K license when it comes to story. Often a Warhammer game will have scattered religious motifs and plenty of Latin phrasing, but refuses to delve into the shadowy, conflicted nature of the universe’s characters. Mechanicus seems to be bucking that trend, trading Dawn of War’s generic ‘stop Chaos’ mission objective with a more insidious story written by Ben Counter, one of Games Workshop’s own Black Library authors.

In pretty much all aspects, then, this is a Warhammer 40K game for the hobby’s most fanatical followers. This potentially makes it impenetrable for more casual fans, although the familiar XCOM systems at play in the battles and upgrades should do much to carry a player who doesn’t fancy praying to the Machine God twice daily.

It’s also the most promising of all the many Warhammer 40,000 games currently in development. It’s far less shonky than some of its cousins, and more engaging in its bizarre, techo-porn aesthetic. While it may not be 40K’s triple-A answer to the love that Fantasy Battle is getting with the Total War: Warhammer series, it’s looking as if Mechanicus could be the 41st millennium’s most engaging game in quite some time.