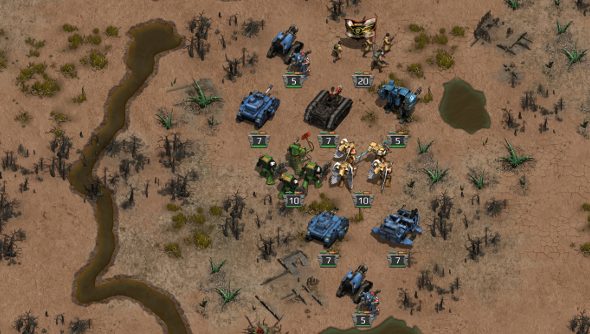 Armageddon, a planet so unpleasant it was named after the end of the world. Set in the absurdly grim Warhammer 40,000 universe it is, of course, a very popular destination and the site of three planetary wars. Everyone wants a piece.

The humans have it, the Orks want it, so this means Waaagh! 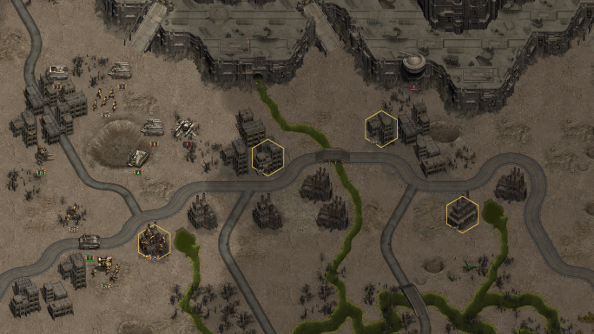 Waaagh!, in the case of Armageddon, takes place on neat little hex-based maps, with individual units taking turns to wallop each other. It’s a wargame, and as simple as a wargame can be. There are no logistics to fret about, no supply lines creating worry lines, no massive stretches of land to slowly traverse; just men, machines and Orks going at it, chainsword against big choppas.

Tying together four campaigns, from tutorial to the third act, is the story of the second war, told through talking heads and static art. Though the voice acting is uneven, it’s a story competently told, and it’s authentic. The Second War for Armageddon is a piece of 40K history, and the main players, the likes of Commissar Yarrick and Ork Warboss Ghazghkull, reprise their roles, tearing each other apart over the planet.

Armageddon neither plays like the Warhammer tabletop game, nor the physical wargame, Battle for Armageddon. Games Workshop jealously guards the rules to its games, so the authenticity of the PC game doesn’t quite extend to the mechanics. Instead, it’s a Panzer Corps game, draped in the skin of Warhammer. This is by no means a bad thing, however. While Armageddon misses the larger scope of the board game and the familiar mechanics of the tabletop game, it’s still built on the foundations of a brilliant wargame. 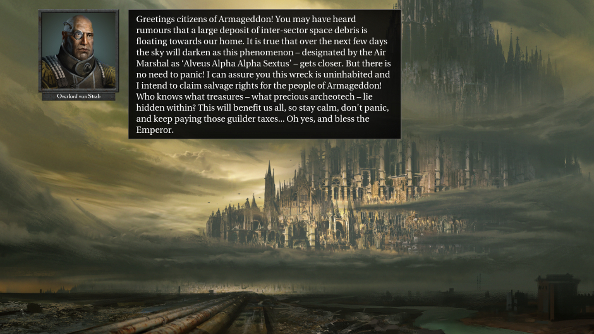 As an Imperial Commander, armchair generals get command of hundreds of units – though how many can be fielded at once is dictated by the scenario – from the Imperial Guard’s meatshield conscripts and stalwart tanks, to elite Space Marines and impressively powerful Titans. While not reaching the dizzying heights of Panzer Corps’ 800 units, Armageddon still comes laden with options. More than 300 different types of walkers, tanks, Space Marines and guardsmen can be deployed – it’s more than any leader could possibly need.

There is, unfortunately, a lot of repetition. Upgraded and tweaked versions of units count for much of the Imperial force, and even distinct warmachines end up being only a stat here or there away from being functionally identical. Still, there are enough unique troops and vehicles so that countless loadouts can be created and then upgraded throughout the campaign. The core force is persistent, though the loss of a veteran unit is not completely devastating.

Only one resource, beyond units themselves, needs to be considered: requisition points. Racked up during battle, these can be spent on brand spanking new units or upgrades for old ones. A turn after they are purchased and plonked onto the map, they can join the fray. While a fresh recruit might not make up for the loss of a unit that’s survived many battles, they can still plug up gaps in defences or back up an army on the frontlines. 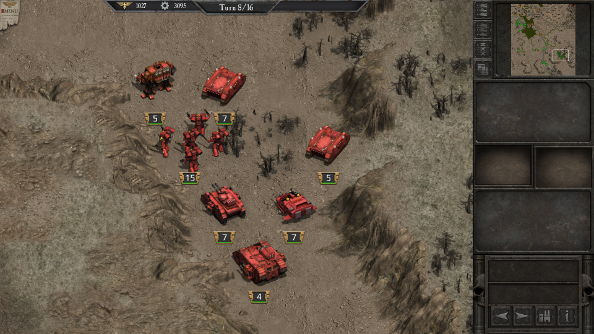 Range is king in Armageddon. The generally small maps make long-ranged units properly nasty buggers, but that’s not what makes range so damn important. There are very few “melee” combatants, with the majority of units able to attack from at least a hex or two away. They’re often loaded with multiple weapons, too, effective at different ranges. Some can’t fight at all in close quarters. Weapon ranges dictate the battle lines, making them uneven and constantly fluctuating. These are not the tidy, straight lines of so many World War 2 wargames.

The sprawling, jagged lines of men and machines are always moving forward. Missions have a turn limit, so it always feels like failure is nipping at your heels. Absent supply lines to defend or missions more complex than holding or capturing hexes, there’s little to halt progression other than an opposing force’s ability to withstand the onslaught of the Imperial Guard and Space Marines.

So missions move forward at a brisk pace, but that single-mindedness comes at a cost. Armageddon can be a wee bit boring. It’s a continual march across maps – unless the mission tasks the Imperials with standing still and defending – with nothing to do but fight and occasionally spend a turn standing on a golden hex to capture a victory point. The fun’s in the tactics. The mathematics of unit stats, puzzles of range and mobility and the navigation of the strategically interesting maps – these are Armageddon’s strengths. 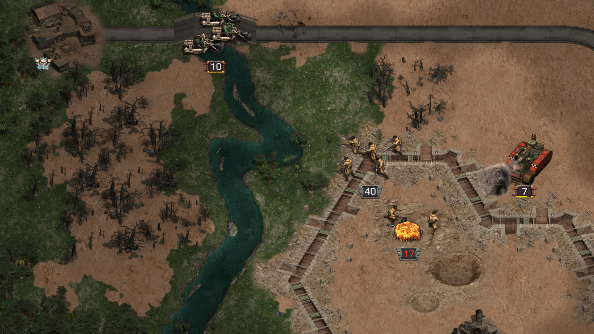 Your eyes, hovering over the screenshots slapped onto this review, will already have told you that Armageddon is an ugly game. In motion, it’s far worse. Maps are bland and aesthetically repetitive. Units, though capturing the basic look of the models they are based on, are essentially tokens, lacking any animation, sliding along the map to the tune of low quality sound effects. No concessions have been made for delicate modern eyes hoping for something with a bit more life.

There are a few things here and there, mostly communication problems, that annoy rather than infuriate. Despite the generally informative UI, some omissions are perplexing. Hovering over terrain, for instance, brings up the hex’s properties, but these properties appear without context or in-game explanation, and vanish the moment the cursor moves away from the hex. Some unit information is hidden away in the purchase and upgrade menu, too, while other bits and bobs appear when the unit is selected. It’s all a bit inconsistent.

Warhammer 40,000: Armageddon is a bit skinny for a wargame. I can’t deny that I’ve missed getting stressed about logistics or big picture strategy, and it certainly hasn’t set my heart aflutter in the way that I hoped a Warhammer wargame would. But there aren’t very many wargames that are this easy to dip into, either. It’s got a focus and simplicity that’s often lacking elsewhere, and it could be indispensible for anyone looking to dip their toes into the genre.