Diablo wasn’t the first action-RPG. The genre stretches back into the early ‘80s, after all, and it’s clearly a very different beast from the MMO shooters that parade themselves under the same banner today. But Blizzard’s iconic 1996 release did help galvanise the template for a very particular kind of action-orientated roleplaying game.

Putting some hands-on time into the first closed beta for Warhammer: Chaosbane, it’s clear the developers behind it cast their latest creation from the same mould that Blizzard helped shape. Chaosbane manages to bring some distinguishing features, but with every enemy hacked and barrel slashed, it feels a little more like a visit to PC gaming in the ‘90s.

Chaosbane, then, is a class-based hack-and-slash dungeon crawler of the traditional kind. Offering optional drop-in co-op gameplay – available either locally or online – it feels designed to be ‘cooperative first’, and a solitary experience second. For this inaugural closed beta only two character classes are available; an Imperial Soldier and a High-Elf mage. That leaves the ranged specialist Wood Elf a relative mystery for now, but we’ve already taken the aggressive Dwarf Slayer out for a spin.

Tackling the beta with Imperial Soldier Konrad Vollen, it doesn’t take long to realise that Parisian studio Eko Software has put considerable effort into capturing the Warhammer Fantasy world. If you’re not a Warhammer devotee, that’s the one without spaceships and mechs – you won’t find a sniff of Warhammer 40k’s sci-fi here. Instead we’re in firm swords and demons territory, and every detail appears faithful to the tone and setting of Games Workshop’s universe. 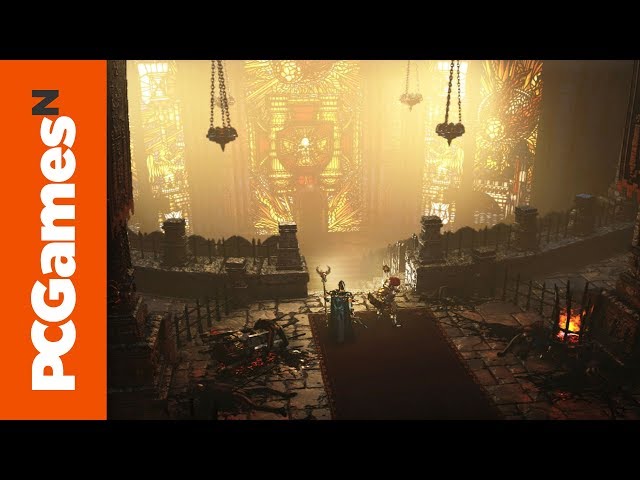 Specifically, Chaosbane is set in the continent of Old World, which has been overwhelmed by a war with the Chaos; demons unleashed on humanity by ill-willed gods. The game focuses on a renewed effort to purge the Chaos horde from the ravaged continent. The beta provides access to a single act of the game’s main campaign, seeing us clear out the Nuln sewers of creatures. Cue plenty of dashing back and forth between quest-givers and rooms packed tight with vigorously energetic demons. It’s not that Chaosbane feel derivative of Diablo, but it’s squarely from the same sub-genre.

Related: Games Workshop wants to change the reputation of its licensed Warhammer Games

While Chaosbane is clearly conceived to delight fans of the Warhammer IP – you can feel the tabletop and boardgaming heritage as you play Eko’s game – there’s enough concession to the non-expert player that you won’t need to have served time with any Games Workshop miniatures titles. The fast and loose action of Chaosbane is much pacier than anything seen in the physical releases, but it’s hard to shake the sense that a trace of HeroQuest and even Space Hulk DNA is present.

The audio in Warhammer: Chaosbane is a standout feature throughout the beta. The music seems to know when to shift between pronounced and subtle, while the sound effects feel very much anchored in the three-dimensional space of each stage. Experienced together, they bring a real sense of physicality to Chaosbane’s world. And, yes, we admit it: the occasional demonic growl that let rip from a precise position in the soundscape really was scary.

And while Chaosbane may be an action-RPG that leans into its role-playing roots, it has borrowed some of the user interface elegance from modern action titles. Whether flicking an eye to the HUD or tinkering with your inventory via a menu, there’s a clarity to the way Chaosbane communicates with you. A little RPG experience won’t go amiss, but this is a game with UI that’s far from dense, and rarely stymied by jargon and bewildering symbols. As such, in the few hours we put in, Chaosbane feels a touch lighter – and more accessible – than comparable RPGs.

There are, however, some of the problems expected of an early closed beta. While the game world was detailed and polished, movement and cutscenes stutter on occasion. We’re largely only able to secure online public co-op matches against much higher-ranked strangers – though charging through a dungeon with much more powerful allies is undeniable fun.

It’s also clear that Chaosbane is being co-developed for both PC and console. For all the time we spend merrily hammering away at our mouse button, playing with a gamepad feels like a more natural fit with the game’s systems and structure. We’ve all seen cases where keyboard and mouse controls have been squeezed gracelessly onto a gamepad for a PC-to-console port, but here it feels like the developers have designed the experience around a controller.

Even so, Chaosbane appears devotedly conventional. It’s plenty of fun, and that will only be underscored by coop play, but Eko’s effort isn’t striving to broaden the definition of ‘action-RPG’ by any significant measure. That needn’t be a bad thing, of course, and what’s here so far represents a promising hack-and-slash that’s both accessible and nuanced. Chaosbane promises to be a guiltless pleasure for anyone who ever fell in love with a Diablo game.