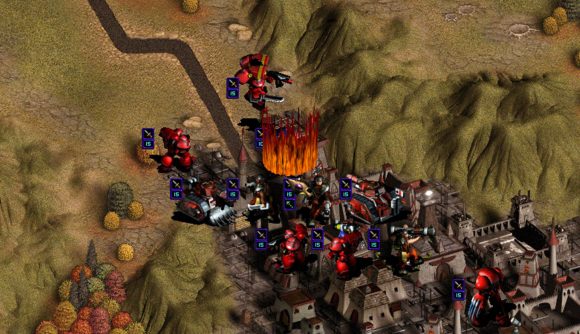 GOG is currently running a weekend sale on a range of Warhammer games, and giving one away for good measure. You can get Warhammer 40,000: Rites of War free on the store-front for the next day or so.

Released in 1999, Rites of War is a real-time strategy game developed by DreamForge. It was published by Strategic Simulations, the developer and publisher behind the influential Panzer General games, as well as a long list of other RTS classics in a multitude of properties. This particular Warhammer 40k title focuses on three races: the Tyranid, the Eldar, and the Imperium, as the latter two are forced into an uneasy alliance to stop an invasion from the former. Reviews were a bit shaky at the time, but you can’t ask for a better price to see for yourself.

Humble has a Warhammer bundle currently going as well, and you’ve 10 days left to take advantage there. Games Workshop’s ever-warring miniatures crossed over into World of Warships this summer, and we spoke to the developers about how that all came about. Total War: Warhammer 2 got a new expansion too, which we found to be reasonably captivating.

Speaking of Total War: Warhammer 2, did you know Henry Cavill’s in it? If you’d like more of the live-action Geralt of Rivia in your life, you can watch him put together his very own gaming rig.